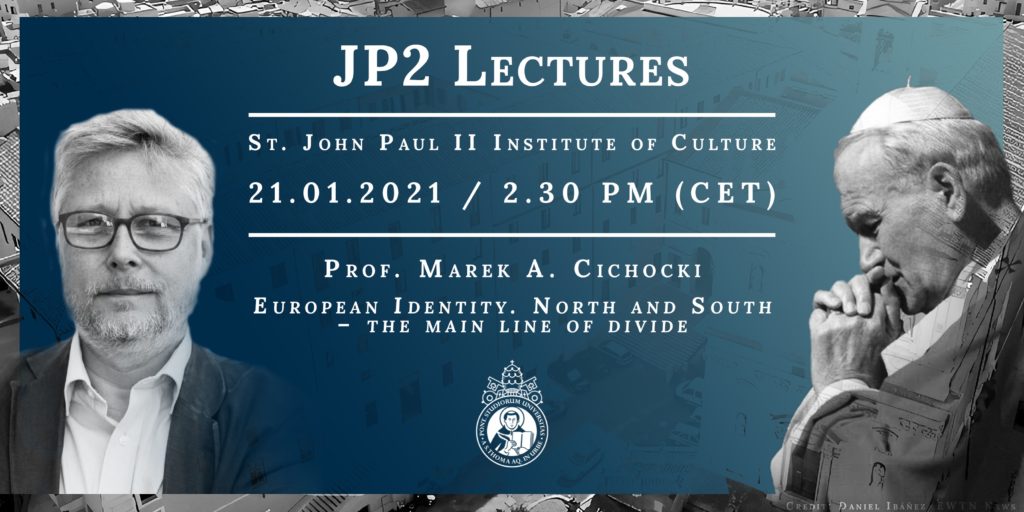 On Thursday 21st January, another lecture was held by the St John Paul II Institute of Culture at Angelicum in Rome.  The lecture was titled Europe’s Identity: North and South – the Dividing Line and was given by Prof. Marek A. Cichocki, professor of College of Europe in Natolin and also the co-founder of Teologia Polityczna as well as the editor in chief of “Nowa Europa” and the author of the book “North and South. Essays on Polish history and culture”.

This first lecture of the year from the series ‘JP2 lectures’ was presented by Alejandro Crosthwaite OP, Dean of Social Sciences at Angelicum.  He brought to the fore the mean ideas from this cycle of lectures, and laid out the coming lectures and events.  Dariusz Karłowicz followed, leading the listeners into issues up for discussion and presenting the main theses and assumptions.

Marek A. Cichocki began with an observation of how the issue of European identity ought to be considered within the context of Christian culture.  Indeed, its continuity has had a fundamental influence in defining Europe.  Contemporary Europe, post-Christian, took shape as of a twofold dynamic: the first being older which set the latinate (Roman) south against a barbarous north, the second being the much later axis of East-West divide.  In this way the notion of a ‘hidden map of Europe’ may shed light on the lasting elements of its culture and the variegated nature of its identity.

As the starting point for his argument Prof. Cichocki chose words which John Paul II used in his first edict given from the Holy See, “The most prominent Cardinals have chosen a new Bishop of Rome. They chose him from a distant land, yet at the same time how close we are through communion in our Christian faith and tradition”.  Drawing the accent to this likeness and partaking of common tradition was essentially important during a time when Europe was divided by the Iron Curtain and hence within the grip of the East-West divide.  The Pope, from the other side of the Iron Curtain had been able to call upon the shared heritage precisely due to its much earlier and profound history.

Prof. Cichocki identified the divide between East and West with the watershed moment in history that has come to be known as The Enlightenment, wherein central aspects of European identity had found new ideals.  Back then, an earlier form of a somewhat natural divide superseded what had taken place up until that point in history.  It was based on the new ideals of modernisation, progress, secular rationalism and utilitarian ethics.  This new divide was therefore at once more abstract and arbitrary in keeping with political tenets, while being deeper and more forceful in its value system.

John Paul II was, according to Prof. Cichocki, fully aware that this divide did not have just a geopolitical orientation.  Basing it upon common heritage within the context of distance between Poland (geopolitically) at the time and its roman-influenced cultural roots gives clear and sound reasoning why the Iron Curtain was not able to overcome the sphere of culture, religion and tradition.

Prof. Cichocki then explained the way in which the divide of the latinate (Roman) south and the barbarous north which took place roughly somewhere between the river Reno in Italy and the Danube, lasted with its mark on European history and culture, taking shape and often returning in various forms.  It became apparent during the Reformation era and also in recent financial crises, that aside from economic reasons, deep-rooted differences in political culture and sociological structures between the countries of the north and south of Europe were made clear.

At this point, Prof. Cichocki recalled intimations of Rémi Brague, who in his writings from his book Europe, the Roman way expressed a similar line of thought. This being that the unusual aspect of European culture as expressed by Brague, has its roots in the indirect acceptance of the civilisational heritage of Athens and Jerusalem by the Romans (making use of a Straussian symbol), who translated this legacy into their language and culture, eventually passing this on to the barbarous populations of the north.  These populations, in turn, fully aware of their rather obscure roots, became Europeans by way of conversion, taking on this same model onto the dynamic of North and South.

The concept translatio imperii of which an embodiment was the later Holy Roman Empire, further relates to the earlier mentioned notion by Prof. Cichocki of a hidden map of Europe. And it was owing to this, that German rulers were able to back their claims for European leadership in the name of Christian universalism. Though the notion of Christian universalism, which bounded together and shaped the culture of Europe over the centuries started to be undermined during the Reformation period. The Christian Empire slowly gave way to new forms of nationhood. According to Prof. Cichocki it is fair to reason that the Reformation paved the way for european absolutism.

Taking Poland as an example within the context presented during this lecture is very apt, since Prof. Cichocki demonstrated how Poland whose beginnings as a nation are closely tied with conversion by baptism, seems to be a case in point for this process described by Brague, which was mentioned earlier.  At once taking into consideration the political form, it is the Roman cultural orientation of writers and chroniclers like Wincenty Kadłubek, medieval writers, and later renaissance thinkers such as Stanisław of Skarbimierz and Paweł Włodkowic, which articulated and shaped Poland in a unique cultural and political way.  As a country of the North, never having been a part of the Roman Empire, Poland took on its needs the roman-latin republicanism and in this way deeply rooted itself in the culture of the South. This essentially set Poland against the rest of the northern european countries, leading it into conflicts with the German ideals of universalism and the ideals of the Holy Roman Empire.

With this perspective it becomes clear why the Polish model of politics and sociological functioning, and the republicanism, catholicism and classical approach to political philosophy at the end of the 18th century became an object of criticism in the minds of those who represented the other polar extreme, that being absolutistic, secularistic and modernistic.

The divide of Europe according to the East-West axis resulted with Poland (in best case scenario) becoming a buffer-zone between Russia and Germany, while the originality and uniqueness of the Polish model which had its roots closely and richly tied to sources from ancient Rome rendered it more of a supporting ballast than an asset in and of itself.

Prof. Cichocki brought to mind a book by Larry Wolff to this context titled Inventing Eastern Europe and demonstrated how the East-West axis was actually demarcated rather arbitrarily, since such a  way of dividing was intended to support not verify the political-philosophical basis, as opposed to factually supporting the nature and reality of the issue.

Eastern Europe came about therefore as polarisation to the rational and enlightened West, which according to this description so aligned its burgeoning political successes and sociological methodologies.  Such a way of perceiving the dividing line as well as its direct consequences, decidedly weighed upon the future fate of Poland, and thrown away was the advantageous and promising way of perceiving a european divide of the North and South dynamic, unfortunately into the unapologetic and uncompromising grind of the East-West perspective dividing as though into two separate blocs.

Left to the fate of superimposed models and forms of modernisation that were alien to Poland, lost not only was Poland’s sovereignty and independence but also contact with essential life giving sources which up until this point Poland had invested her power and strength in. If we recall at this point here the cited words of John Paul II from the inauguration of his pontificate, it gives a sense of hope for a renaissance of another type of thinking for Europe.

According to Prof. Cichocki, the way forward for Europe in the 21st century can be found in how relations develop between Christian aspects of culture and the heritage of a post-Christian civilisation. And in this light the relevance of our identity and its nature while keeping a good sense of orientation, becomes key in considering the notion put forward here of a hidden or concealed map of Europe.

With that said, we invite you to our next lecture from our series of John Paul II lectures, titled Church in Crisis which will be delivered by Prof. John Cavadini and will take place on 26th February at 2:30 pm (CET).