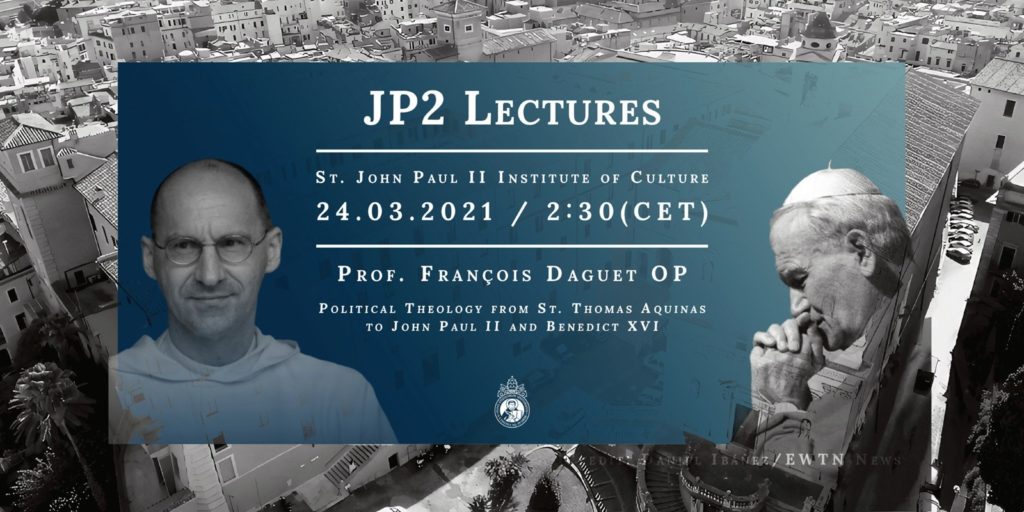 On Wednesday, 24 March, we invite you to the next lecture in the series “JP2 Lectures” at the Angelicum, which will be given by Prof François Daguet OP. The lecture, entitled “Political Theology from St. Thomas Aquinas to John Paul II and Benedict XVI”, will be dedicated to the theological reflection on the rooting of man in the political community, as formulated by St. Thomas and developed by St. John Paul II and Benedict XVI. The broadcast of the lecture, which will be in French with English subtitles, will begin at 14.30.

If we look at belonging to one or more communities as a constitutive feature of the human person, we can easily understand why theology tends to look at this fundamental anthropological fact. “Political theology”, understood as the theology of politics, that is, of man in his political dimension and of political communities, is experiencing an important development today. In fact, the first author in the Catholic tradition to address this topic was St. Thomas Aquinas, although he did not leave a synthetic text on the subject, so that the issue remains a little-recognised part of his work. Although the indirect influence of St. Thomas was powerful, it was only in the twentieth century and at the decline of Christianity that this topic returned to the field of theological research. The joint work of St John Paul II and Benedict XVI therefore seems decisive in this respect today.

Prof. François Daguet OP – theologian, lecturer and award-winning author and researcher of ecclesiology and political doctrine of the Church. He received his doctorate in theology from the University of Freiburg and studied at the prestigious ENA in Paris. He is currently a professor at the Catholic Institute of Toulouse and the Studium des Dominicains de Toulouse and presides over the Saint Thomas Aquinas Institute. Author of the famous “Du politique chez Thomas d’Aquin” (2015), for which he received the Prix Biguet award.