1. How did you end up studying at the Angelicum?

In the year 2001, I walked into a bar in Rome and met a group of men who changed my life. At the time I was living in Trastevere, working as a tour guide and leading a life worthy of the cover of Cosmo. The bar was an Irish one, just around the corner from my studio apartment, and the men were seminarians from the Pontifical North American College.

Having grown up an occasional Anglican, the freedom of my new life in Rome had taken me far from any form of church or worship. I was giving tours at the Vatican, had seen firsthand the partying side of the World Youth Day 2000 celebrations in Rome, and saw hypocrisy everywhere. I scoffed at the seminarians, “The Catholic church is a waste of money and space! Sell the churches and give the money to the poor! Leave women alone to make their own ‘choices’ about their bodies! This sham is not what Jesus founded!” It was an animated discussion; they handed me a copy of the catechism and put me in touch with Father Michael Osborn from the Diocese of Kalamazoo. Fr. Osborn invited me to make a list of all the reasons I wasn’t Catholic, and then call him.

I took the challenge seriously, combed through the catechism, looked up the footnotes, made my lists. I was sure that I would be the one who could bring down the church. I would find The Thing that unraveled this ridiculous organisation. Many hours of reading and discussion later, my list of reasons why I am not Catholic had been blown away. What I had sought to unravel, had started to sew itself together inside of me. I had found something beautiful and true—or rather, it had found me.

Currently I am a stay-at-home mum to our four children, age 11, 9, 7 & 5. Additionally, I give tours of the Pontifical Swiss Guard Museum in Naters in German, Italian and English. I direct a church choir and, until recently, sung in the Oberwalliser Vokalensemble. I also work part-time as an English teacher, and am currently investigating post-graduate study options.

3. What are your greatest challenges/achievements?

It is a cliche, but I have to say my family.  My children are my greatest source of frustration and joy, and my husband is my rock who helps keep my wandering feet on the ground!

4. Where are you living now?

5. What is your motivation?

My faith plays a central role in everything that I do. Authentically living the invitation to “do as he tells you” in a crazy busy world, especially with children, who can be so easily pulled hither and thither by the crazes of modern culture is a constant challenge. We are fortunate to live in a Catholic canton in Switzerland, this means that our whole village comes together for Corpus Christi processions, for example. There is a strong sense of Catholic community here, which I treasure deeply. Learning to analyse the world, as St Thomas did, helps to keep things in order; helps to keep Christ at the centre of everything.

6. If you could go back in time, what would you tell yourself when starting out?

There was a time in my life when I saw success as the sole object of all my endeavours and pursued that which I thought I needed in order to be successful. My life experiences, so far, have taught me that by pursuing that which I love, I can achieve not only success, but also happiness (in the fullest sense of the word).

I left Norwich School with A levels in Maths, Chemistry and Biology, and headed first to Sandhurst, then to Bristol to study Biomedical Science. After the diversity of Norwich School and the business of Army life, university was rather underwhelming, so I took a temporary job as an Au Pair in Rome, Italy. Five years later, having worked as a VIP private guide, translator, completed a Bachelors in Philosophy and fallen madly in love with a Swiss Guard I left Rome and got married in the other Cathedral in Norwich. Following a super year at Enterprise Rent a Car in Southampton we relocated to Zürich. During our 8 years in Zürich, I volunteered as a Catechist, and worked as Director of Religious Education in our parish. We moved to the Alps after he birth of our 4th child in 2012.

(I know it’s 150 words, but I cannot leave anything else out without losing the thread of the story!)

8. How do you think the Angelicum helped you to get to where you are now?

At the Angelicum, I found my catholic community. Being surrounded by people from so many countries and cultures allowed me to really experience the truly catholic nature of the Church. I met some of my best friends at the Angelicum. Fathers who I have been able to turn to for support and advice, women who have shared the journey into motherhood with me, Sisters who have lifted me up in prayer when I could not see past the dirty nappies and sleepless nights. Knowing that that community is there, based on our shared experience of the Faith (and Logic classes with Father Philippe-Andre Holzer O.P.!) is immense. There are quotes from our professors of 15 years ago, that we still share as secret jokes – might not be appropriate to share them here though.

9. What is your favourite Angelicum memory?

Mass with Cardinal Cottier. I sang in the choir under the direction of Father Stephen Maughan (who actually flew to Zürich to baptise my daughter – Angelicum community wins again!), listening  to the Fathers chant the Missa de Angelis is a memory that will stay forever. 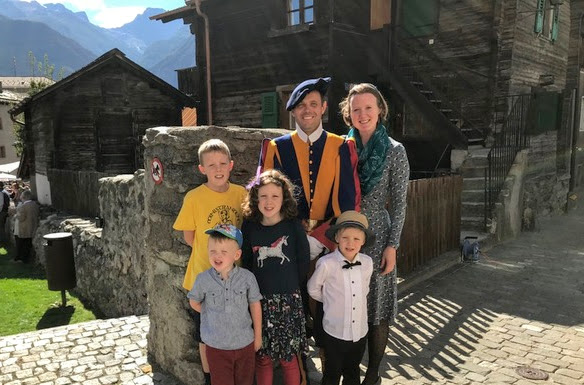