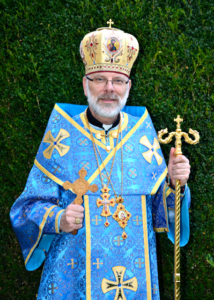 Kenneth Anthony Adam Nowakowski was born in 1958 in Saskatchewan, Canada.  He held several positions in the local government before discerning his priestly vocation.

In 1984, he graduated from the University of Toronto with a Bachelor of Religious Studies and Philosophy. He then went on to study at St. Josaphat’s Ukrainian Catholic Pontifical College in Rome.   While in Rome, he earned a Bachelor of Sacred Theology from the Pontifical University of St. Thomas Aquinas in 1989.  The following summer he was ordained a priest for the Ukrainian Catholic Eparchy of Saskatoon.

Fr. Nowakowski returned to Rome to study Canon Law at the Pontifical Oriental Institute.   In the midst of his studies, he became aware of the growing number of immigrants in Italy.   As a response, he founded and directed the Ukranian Catholic Refugee Office.

In June of 1990 he was appointed vice chancellor and chief of staff to His Beatitude Myroslav Ivan Cardinal Lubachivsky, Father and Head of the Ukrainian Catholic Church and Major Archbishop of Lviv of the Ukrainians.   During this time he also served as vice-rector for the Holy Spirit Seminary in Lviv.

Throughout this time, Father Nowakowski remained conscious of the poor.   He played a major role in founding the Ukrainian Catholic Church’s official charitable organization, Caritas Ukraine.  Until 2001, he served as president of this organization, overseeing various charitable works ranging from providing basic necessities to the poor in Ukraine to building a hospital.

In 2001, Father Nowakowski was appointed rector of the Holy Spirit Seminary in Ottawa, Canada.   The following year we was appointed Press Officer/Spokesperson of the Ukrainian Catholic Church in Canada.  He then served as the Vatican Accredited Media Personnel Liaison for World Youth Day in Canada.

In 2007, Pope Benedict XVI named Father Nowakowski as third bishop of the eparchy of New Westminster for Ukrainian Catholics in British Columbia and the Yukon.   This past January, Pope Francis appointed him Bishop of the Ukranian-Catholic Eparchy of the Holy Family of London (Great Britain).

Congratulations, Nowakowski!   Be assured of the prayers of your many friends at the Angelicum.