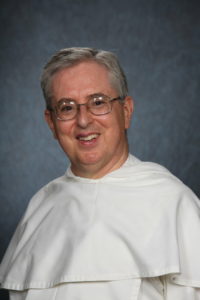 In 1981 my Provincial gave me permission to complete my studies in canon law by pursuing a doctorate at the Angelicum. I asked for just two years …twenty-two years later I was allowed to return to the United States to serve the people of “my country” more directly. I came back with the doctorate in canon law and years of experience teaching theology and canon law, working in  the Roman Curia at the Vatican and for years on the staff of the Pontifical North American College. It was an extraordinary experience to serve the universal Church at the heart of the Church, to serve the universal mission of the Order of Preachers both at its premier pontifical university and in its international projects, and to serve the bishops of the United States at their flagship seminary in Rome, the Pontifical North American College. In spite of these singular experiences and opportunities, I really wanted to be back “home”. After launching one of the most successful advancement projects for “Mother Ange” ever, and a host of other prestigious initiatives, in June 2003 I was allowed to return to America, to my “home-away-from home” at the priory of St. Dominic serving its parishioners in Youngstown, Ohio. In these past thirteen to fourteen years, I have continued to be engaged in the same types of service that I had in Rome but now at a number of different places across America.

From 2003-2007 I served the Archdiocese of Detroit at the request of Cardinal Maida teaching at Sacred Heart Seminary, handling clergy disciplinary cases, and working for the Pope John Paul II Cultural Center. I was blessed to have a confrere in Detroit as rector of the seminary … Fr. Steven Boguslawski. I had no idea that this friar whom I had introduced to the former rector would be the one to welcome me back to my home diocese! Later we would return together to Washington D.C. to the House of Studies where we prepared Dominican priests for the Church. In 2007 Fr. Boguslawski was named the President of our Pontifical Faculty of Theology of the Immaculate Conception at the Dominican House of Studies on Michigan Avenue across the street from the Catholic University of America. At the same time, at Fr. Boguslawski’s request, our Provincial appointed me professor of canon law and the first Vice President for Advancement for our Pontifical Faculty. Once again I had the responsibility of creating a functioning advancement office for a Dominican educational institution. Teaching and setting up the advancement office put me back in the spirit of my days in Rome, when I was usually filling the duties of two or three full-time positions of responsibility simultaneously.

Within a year of arriving in Washington, our friars at St. Dominic’s Priory in southwest Washington elected me to serve as their prior. The priory housed more than 25 friars, most of whom were advanced seniors, receiving care in the priory’s assisted living facility. For these three years, I was back to doing the three roles simultaneously. In 2011, having concluded my term as prior, my Provincial asked that I accept the invitation of the President of Christendom College in Front Royal, Virginia to help out teaching and serving as the assistant chaplain to the college. Then in 2012-13 Archbishop Allen Vigneron of Detroit together with Bishop Walter Hurley of Grand Rapids, Michigan asked my Provincial that I return once again to my home state. New challenges in applying the law of the Church to a variety of Church needs had arisen and their plea was at least one year’s commitment from me. It was good to be close to family once again, serving the bishops of my home state!

The academic year of 2013-14 I was once again back in Washington at the Dominican House of Studies teaching canon law. In 2014-15 I tried to combine an unusual combination of duties. Archbishop Salvatore Cordileone of San Francisco asked that I teach at his major seminary St. Patrick’s in Menlo Park, California and Mr. Timothy Busch wanted me to assist his law firm in Orange County, California in serving the bishops of the United States. The two of them agreed that teaching at the seminary would not impede my work for the law firm. With disappointment, I reached the conclusion that it was time to withdraw completely from the effort of teaching and return to my beloved St. Dominic Priory in Youngstown, Ohio. This was not to be. On June 29, the feast of Sts. Peter and Paul, Archbishop Gomez of Los Angeles called me. “Father Fox, what are you doing in Ohio, I need you here in Los Angeles!” To say the least, this caught me off guard. I told him, “That’s great! But you must talk to my Provincial.” On August 10, 2015, I arrived in Los Angeles to begin work for the Archbishop as his Vicar for Canonical Services. I reside at an archdiocesan parish, St Brendan’s, about one mile from the offices of the Archdiocese.

I have received a very warm welcome and have met so many good, faithful people serving our Church. My responsibilities are quite varied. I am effectively the Archbishop’s canon lawyer. I help with all canonical matters, except marriage related cases, including local cases presented for canonization, assisting with cases of clergy discipline, reviewing agreements regarding buying and selling property, and so many other delicate matters of church administration that arise in the largest archdiocese in the United States.

The years in Rome have proven to be so important in serving the bishops of the United States. The education and the experience of working at the Angelicum has been priceless in its value. At the same time, I feel my thanks is so inadequate for God’s gift of my Superiors and so many friends whom I have met over the years who helped to make this all possible. It has been an exceptional grace from God for me to have met so many good, faithful and generous people, who are committed to our Savior, to our Church, and to so many Dominican Friars trying to fulfill Jesus’ command to proclaim the Gospel to all peoples. It is not possible to do all that God expects of us on our own or as isolated individuals. It is humbling to realize how much we depend on others in fulfilling God’s plan for each of us. When I consider the status of the Angelicum, the Pontifical University of St. Thomas in Rome, in 1981 when I first arrived and saw what it is today, I am awed by its growth, by the improvements to its fabric and its staff, serving men and women from around the globe. To my mind, it would not even exist today, if not for the prayers and dedication of a host of faith-filled people willing to share the burden of so great an endeavor.

Fr. Fox continues in his tireless service, working remotely during the COVID19 crisis.  And he still remembers fondly his days at the Angelicum.  The Pontifical University of St. Thomas Aquinas is a worthy cause – DONATE NOW at ANGELICUM.it/GIVE