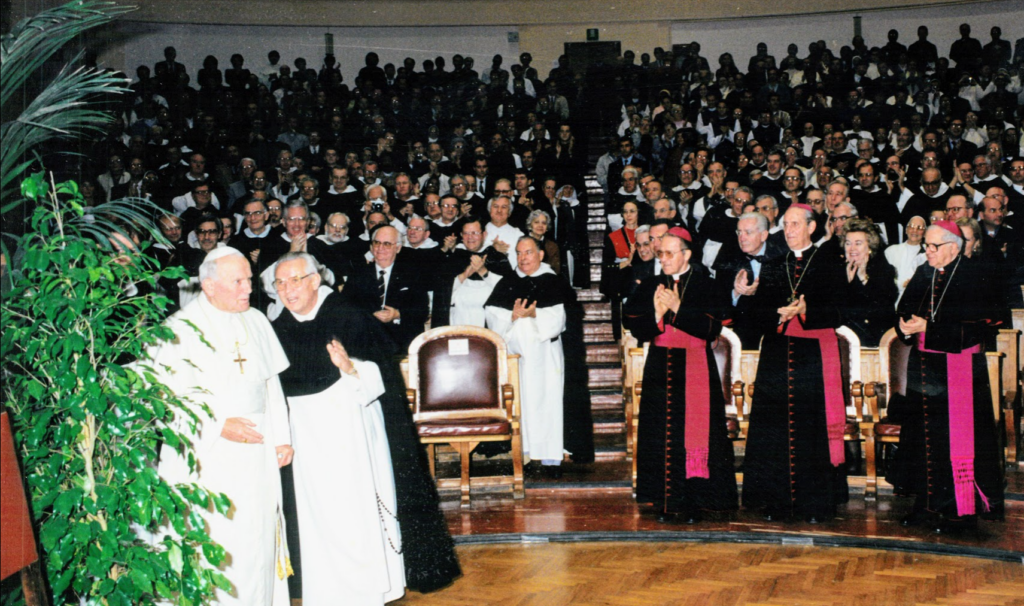 It is with great sorrow that our academic community shares that Saturday, October 22, Father Edward Władysław Kaczyński, O.P. has passed away. A Dominican of the Province of Poland, he served at the Angelicum as a professor of Moral Theology, Director of the Mater Ecclesiae Higher Institute of Religious Studies, and two terms as Dean of Theology and Rector Magnificus of the university. May the soul of Fr. Władysław and all the faithful departed rest in peace.

On October 22, on the liturgical commemoration of St. John Paul II, at 5:05 pm, Fr. Edward Władysław Kaczyński, a Dominican friar, rector of the Pontifical University of St. Thomas in Rome from 1993 to 2002, died in Warsaw.

Edward Kaczyński was born on September 1, 1937 in Trzcianka near Wyszków in the Łomża diocese. After high school graduation, he entered the Order of Preachers, taking the name Władysław. In 1958 he made his first profession of vows, and three years later – his perpetual vows. On June 11, 1964, he was ordained a priest in Cracow by Cardinal Karol Wojtyła.

For most of his life he worked academically. In 1967, he received a bachelor’s degree in canonics from the Academy of Catholic Theology in Warsaw. He continued his studies in Rome, where he earned a doctorate in theology at the Pontifical University of St. Thomas (Angelicum) in 1970. He then studied at the Pontifical Biblical Institute in Rome and the Dominican École Biblique et Archéologique in Jerusalem, earning a canonical license in Scripture.

For several decades, Fr. Władysław was associated with the Angelicum – from 1973 he taught fundamental moral theology. The objects of his interest – in addition to issues of moral and biblical theology – were contemporary methodological and metaethical issues. He paid special attention to the anthropology and ethics of Karol Wojtyła. From 1980 to 1986 he was dean of the theological faculty of the Angelicum, and from 1993 to 2002 he was rector of the university.

In 1998, the then General of the Order of Preachers, Father Timothy Radcliffe, awarded him the title of Master of Sacred Theology. This is the highest academic title awarded in the Dominican Order by the General for outstanding academic achievement.

In 2009, Fr. Kaczyński returned to Poland permanently and settled in a monastery in Warsaw’s Służew. He has published more than 150 scientific publications. In 2008, “My Meetings with John Paul II” was published by the PAX Publishing Institute, and a year earlier, a collection of studies “Truth – Good – Conscience” was published by the same publishing house.

He died in Warsaw on Oct. 22, liturgical memorial of St. John Paul II, of whom he was a personal friend and great admirer.

He was a religious man and from his simple, reserved smile shone through his inner Christian life.

Edward was one of the great friendships of my adult life. He possessed enviable qualities, such as calmness of character, a sense of conviviality among friends, an attachment to his homeland, and roots in the curial and ecclesiastical circles of Rome. But also an innate elegance in personal relationships.
I still remember how and when I first saw him in the refectory of the Angelicum (at the back, on the right, before the last column) and how I saw him leave, now ill, for Poland at the beginning of the third millennium.

We were together in the same 1970s doctoral students in moral theology of Fr. Dalmazio Mongillo, who at that time was among the most important Italian theologians.

His scholarly contribution can be detected by consulting the catalog of the Angelicum Library, but for specialists his greatest contribution consisted in addressing new questions with the Thomist background and foundation. Already his doctorate on the New Law in the Summa Theologica has these characteristics, as do his further studies on conscience and the virtues. He contributed decisively to the scholarly dissemination of the cornerstones of Catholic morality in the version of Pope Wojtyla, and his disciples.

He was at the Angelicum as professor of Moral Theology for decades at the end of the last century and also
twice Dean of Theology and twice the Magnificent Rector. He worked intensively and for a long time as a consultant to the Congregation for the Doctrine of the Faith.

He was also important to the Angelicum because he maintained a wide network of relationships with Polish bishops and Polish ecclesiastical students in Rome. These were among the most motivated and prepared students for the doctorate.

As Rector, within the limits of available funds at the time, he undertook building restoration work (such as that of the University’s great facade), and oversaw the development of the various faculties and the Thomistic Institute. The Faculty of Social Sciences was in bad shape, and he “forced” me to become dean with the heartfelt phrase: “You have to accept! If no one helps me, how can I be dean?”

Edward came from “deep Poland,” from Trzcianka in the forests of Masovia, from a large family of forest guards. He gladly told me about World War II, the Germans, the partisans, and how his father helped Jews in need. In 1964 his mother, to pay for the party in his village when he was ordained a priest, had sold his white horse. He showed me a photograph of it 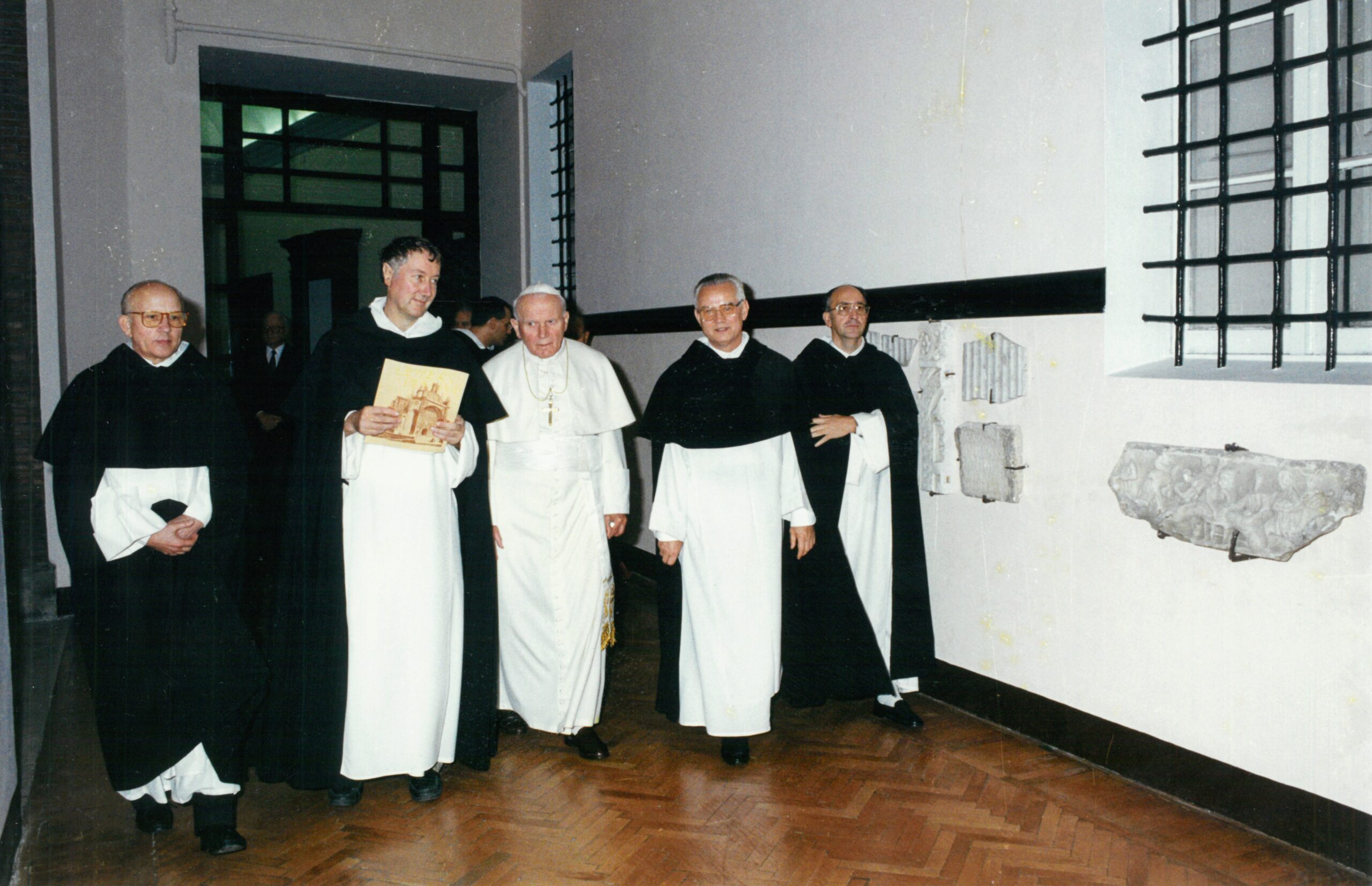 Academic awards and distinctions
Studies: Dominican College of Philosophy and Theology in Kraków 1958-64; Theological Faculty of the Academy of Catholic Theology (M.A. in Theology 1967); Pontifical University of St. Thomas in Rome (Ph.D. in Theology 1970); Bible and Archaeological French School in Jerusalem (on the Bible, 1973); Pontifical University of St. Thomas in Rome 1973, lecturer in moral theology and biblical ethics 1973, Extraordinary Professor 1980-1983, Ordinary Professor 1983, Dean of the Theological Faculty 1980-1986; Director of the Mater Ecclesiae Higher Institute of Religious Studies 1990-1993, Rector 1993-2001; Member of the European Council of the Federation of Catholic Universities 1993-1996; Chairman of the Committee of Rectors of Pontifical Universities and Roman Universities, 1997-2000; Consultant of Vatican Congregations: the Congregation for Catholic Education (Universities, Seminaries, and Catholic schools) 1989, the Congregation for Priests 1990, the Congregation for Religious Doctrine 1992, the Congregation for Bishops 1999; Medal for merit in the development of the Mikołaj Kopernik University of Toruń 1998; Master in Sacred Theology (the highest honorary title of the Dominican Order) 1998; Honorary Member of the International Burckhardt Academy 1998. On 26 June 2006 he received the W. Pietrzak Science Prize, awarded on 23 May by the Civitas Christiana Chapter, together with the Diploma and Medal for his scientific commitment in moral theology of Thomistic and Biblical orientation, and for his teaching, organisational and social activities at the Pontifical University of St. Thomas ‘Angelicum’ in Rome.