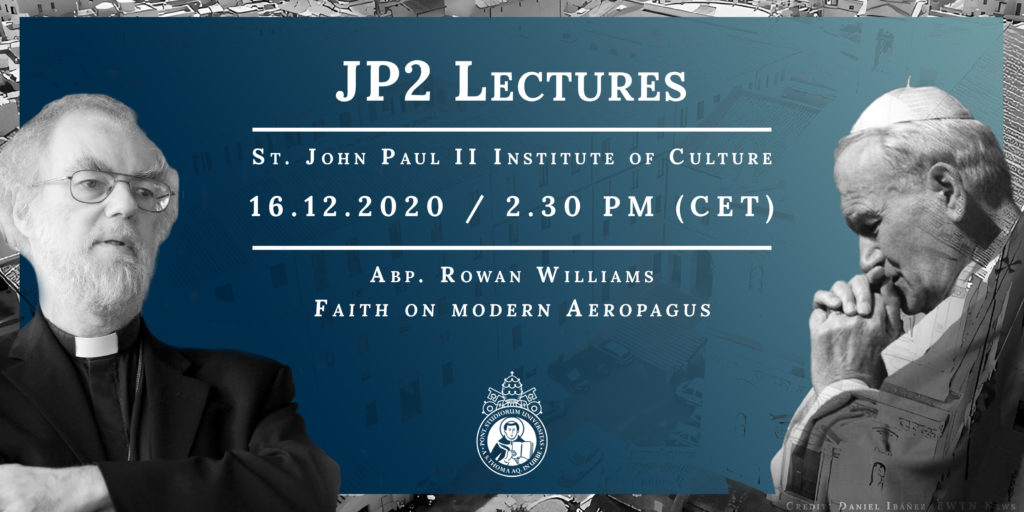 You are invited to the next talk of the “JP2 Lectures” series at the Angelicum, organized by the St. John Paul II Institute of Culture, given by Archbishop Rowan Williams. The topic is “Faith on modern Areopagus” concerning the transcendent source of certain elements of the modern secular culture. The LIVESTREAM of the lecture, which will be given in English, will start on Wednesday, December 16 at 2.30 PM [CET]

St Paul in Athens declares openly what his audience worship unknowingly. In this lecture, we shall look at some of the places in our contemporary culture where assumptions are made about our human environment which point towards a transcendent context. There is the question of  universal and ineradicable human dignity, in all circumstances; and there is also the less-discussed issue of how we assume that we can make sense of other humans, even strangers, and that we can come to share language with them. This latter question will be examined with the help of St Edith Stein’s famous monograph on “empathy”. A third, more complex area is the circumstances where people are driven to make a stand in the name of something “sacred” – that is, something other than the calculated and functional management of the world. Etty Hillesum’s reflections on this subject will be a starting point. The lecture moves towards a conclusion about the nature of “logos” in the world and its theological resonances.

Archbishop Rowan Williams – born in Swansea, Wales in 1950, Anglican bishop, scholar, theologian and poet. Master of Magdalene College Cambridge and honorary professor at the Department of Modern Christian Thought at the University of Cambridge. He graduated in Theology from Christ’s College Cambridge and received his PhD in Philosophy in 1975 at Wadham College Oxford. He was Archbishop of Wales from 2000-2002 and Archbishop of Canterbury from 2002-2012. Appointed life peer in the House of Lords in 2013, he served as Baron Williams of Oystermouth from 2013 until his retirement on August 31, 2020.

The first lecture in the “JP2 Lectures” series took place on October 19, 2020 during the inauguration of the academic year at Angelicum. The lecture entitled “Does Christianity need culture?” was given by the President of the Pontifical Council for Culture, Cardinal Gianfranco Ravasi. Watch the lecture (with English subtitles): https://youtu.be/ZwD6rbxyCTg.

Watch the lecture given by prof. John Finnis “John Paul II and the Fundamentals of Ethics”: