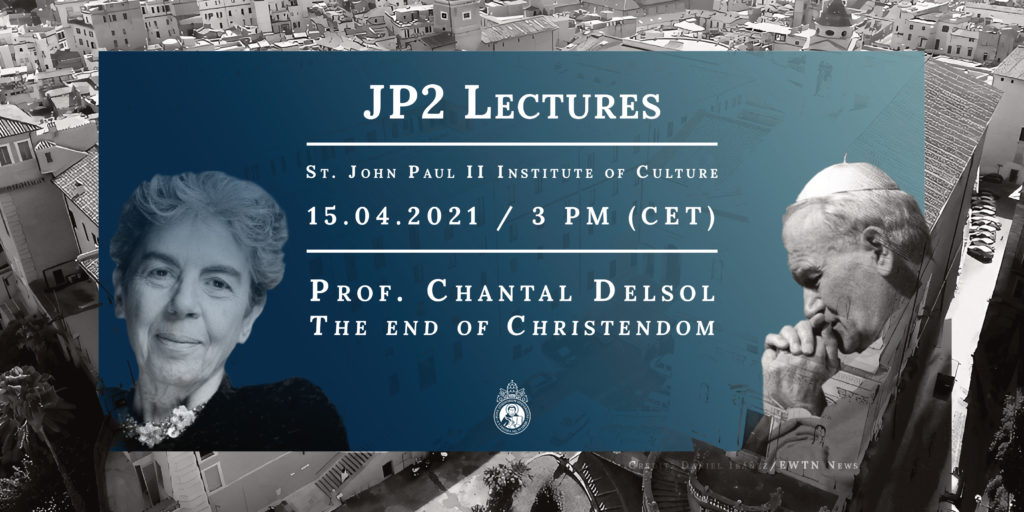 On Thursday, 15 April, we invite you to the next lecture in the series “JP2 Lectures” at the Angelicum, which will be given by Prof Chantal Delsol.  The lecture, entitled “The End of Christendom”, will be devoted to the contemporary situation of Christian civilisation in the post-Enlightenment world. The broadcast of the lecture begins at 3.00 PM.

Are we living the end of Christendom? It is not about the bankruptcy of Christianity, which although marginalised in the West, is still alive. It is about the end of the great influence it exerted on morality and, as a consequence, on laws. The attacks date back to Renaissance but above all to the times of Enlightenment. However, it is the aggressive and continuous assaults from the second half of the 20th century that are leading to (a definitive?) failure. The aim of this lecture is to describe the present situation: a complete inversion of norms. The past is becoming an unknown country. How can and must the Christians act? What attitude to adopt in the face of marginalisation and mocking?

Prof. Chantal Delsol  is a philosopher, writer and professor of political philosophy. As a graduate of Philosophy and Art History at the University of Lyon, she received her PhD (ès lettres) in philosophy at the Sorbonne under Julien Freund in 1982. In 1992 she became professor at the University of Marne-le-Vallée. Member of the French Academy. Winner of many awards, including the Academy of Ethical and Political Sciences Award (1993,2002) Mousquetaire Award (1996) and the French Academy Award (2001).

Learn more about the St. JP2 Institute of Culture and see past events