From Cracow to Rome: John Paul II in the Photographs of Adam Bujak 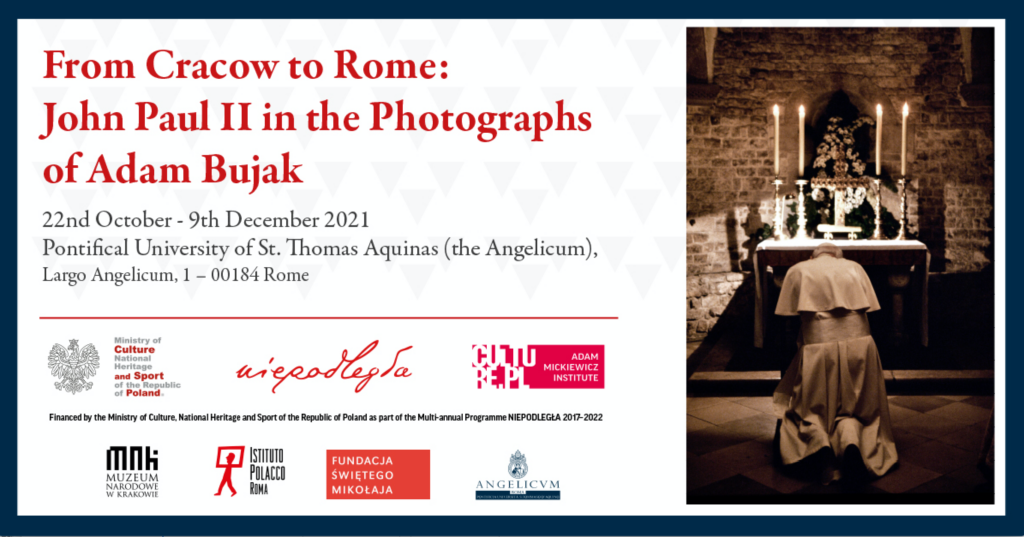 From Cracow to Rome: John Paul II in the Photographs of Adam Bujak

In celebrating the 101st anniversary of the birth of Pope John Paul Il, the exhibition “From Krakow to Rome: John Paul II in the Photographs of Adam Bujak” opened at the Angelicum in Rome. The exhibition is organized by the Adam Mickiewicz Institute, the Polish Institute in Rome, the St. John Paul II Institute of Culture in Rome, and the National Museum in Kraków.

Registration to this event HERE

Almost 200 photographs show special moments in Poland’s contemporary history that were accompanied by shared euphoria and at the same time thoughtfulness as well as unity, which was the Polish people’s greatest strength at the time. The photographs follow the Kraków cardinal’s path to the throne of the Holy See as well as offering a collective portrait of Polish people and also Kraków, Adam Bujak’s favourite city. “I’d like this strength to be seen by people who don’t realise that such momentous events took place in Kraków”, underlines the photos’ author who also took part in the landmark events – Adam Bujak.

The photographs enable us to stand next to the crowd once again and look at the collective emotions during the Millennium of the Baptism of Poland, pictures of the Ark of the Lord under construction, processions to the Skałka church, or the White March. There is no shortage of private photos from Cardinal Wojtyła’s room in the Bishop’s Palace and shots of spontaneous meetings with people.

The exhibition covers the period from the Millennium of the Baptism of Poland in 1966, which was initiated by Cardinal Stefan Wyszyński, to Pope John Paul II’s last apostolic trip to his homeland in 2002. Above all, the author of these pictures concentrates on Kraków-related themes in the pope’s biography, portraying him first as a metropolitan, then a cardinal and, finally, as John Paul II visiting Kraków during his pilgrimages.

Closely bound to the Catholic Church, the photographer’s oeuvre has always touched upon human spirituality. The author has never concealed his religious views and, as a participant in church ceremonies, has always had his camera with him. His near close-ups try to capture the sphere of the sacred and the sense of community felt by the faithful. Spirituality and mysticism pour out of contemplative shots that express the beauty of nature and Kraków.

The themes, set within the classical style of photography, give the viewer the impression that the author himself is immersed in the moment in which he finds himself, that he is part of a greater community, thanks to which he knows how to capture the details of religious rites and ceremonies. As Magdalena Święch, the exhibition’s curator points out, “Photography did not appear in Adam Bujak’s life by chance. Taking a camera and turning it into his main work tool was dictated by the things that fascinated him as an artist. Having encountered religious rites, Bujak strove to explore their essence. Participation in ceremonies allowed him to identify with the people in his photos, to feel in concert with them. This has enabled photographic documentation to become more than just a superficial record”.

Alongside a collective portrait of the Polish people, the focal figure, of course, is Karol Wojtyła, whom Adam Bujak photographed for over 40 years and, as he himself underlines, who became the most important theme of his work. Thanks to this, similarly to Arturo Mari he is perceived by many as the pope’s personal photographer. A photo of Karol Wojtyła taken at Wawel Cathedral in 1958 was the first of several dozen thousand shots. The exhibition has no shortage of pictures of Karol Wojtyła as an ordinary person who valued modesty and minimalism in daily life.

In times when you had to stand in a queue for three hours to buy some rolls of film, every photo had to be well thought-out. Despite this, Adam Bujak took these pictures for himself, for his own pleasure, because no one wanted to publish them in communist Poland. It was not until the Iron Curtain fell that the Kraków-based photographer’s pictures became a priceless memento for us all.

The exhibition is accompanied by a coherent and richly illustrated publication from Wydawnictwo MNK under the same title, as a supplement to the photographer’s recollections. The photos, arranged in chronological order, come with captions describing historical events in Kraków in the second half of the 20th century. Wydawnictwo MNK’s publication features portraits in which Bujak captured Karol Wojtyła’s kind look, so open and friendly in contacts with other people. We will notice his steadfast attitude in building community, and the effects of activity undertaken on his own and with others, including Cardinal Stefan Wyszyński and Cardinal Franciszek Macharski. We can see Wojtyła’s calmness and charisma as an archbishop, then a cardinal, and, finally, Pope John Paul II visiting Kraków during his first pilgrimage to Poland, memories of which conclude the album.

“The exhibition includes Adam Bujak’s photographs documenting Cardinal Karol Wojtyła’s activity as archbishop of Kraków, highlighting the special bond shared by the future pope and our city. This is a portrait of Cardinal Wojtyła organising the Millennium of the Baptism of Poland in 1966 in the Kraków church, supporting the construction of the Ark of the Lord Church in Nowa Huta, but also taking part in the city’s daily life, participating in religious ceremonies or meeting with residents. Many of the pictures will have their premiere showing at the National Museum in Kraków in such a selection. Ones that stand out include series devoted to the second funeral of Casimir Jagiellon and Elisabeth of Austria at Wawel Cathedral as well as pictures showing the archbishop’s private room, where a desk and a pair of skis stood next to each other. Through their exceptional artistic standard, Adam Bujak’s photographs offer a study of the person of Cardinal Karol Wojtyła as well as a reportage from the life of 1960s and 1970s Kraków, where the faith of the future Catholic saint developed and where, as he always underlined, every stone and every brick was dear to him”.

“Bujak describes his photography as concrete. The most important thing about it is a desire to know more, avoiding cool reporter-like observation. This is photography that treats the camera as a tool subordinated to the task of saving spiritual experiences from oblivion – both those of other people and those of the artist himself. A theme that tugs at one’s heartstrings and a wish to record a unique moment: without this it is not worth releasing the shutter of the camera.

The technical side of photography is less important to Adam Bujak. The artist mainly focuses on the simplicity of the composition and the purity of the frame. In his view, this is what creates the simplicity of the message, which does not need the interference created by distorted perspective or excessively dynamic means of expression”.

Magdalena Święch, curator of the exhibition

“The photographs presented in the exhibition are a trip into the past for Adam Bujak, an opportunity to once again meet with the man who was the artist’s spiritual guide, a wish to return to special events, a process in which the chronology of events is secondary, the most important thing being the recollection of things that moved and fascinated the author”.

Magdalena Święch, curator of the exhibition