Is the contemporary Church in crisis? A summary of prof. George Weigel seminar at the Angelicum (2021 Dec. 10) 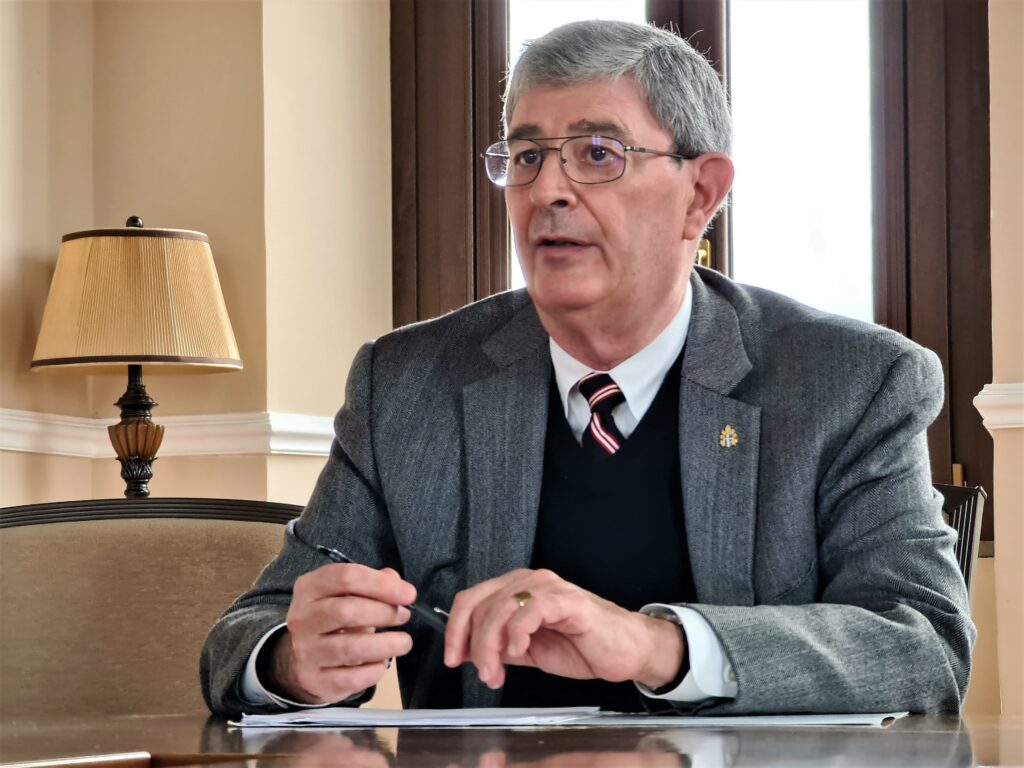 Is the contemporary Church in crisis? A summary of prof. George Weigel seminar at the Angelicum (2021 Dec. 10)

Through 2000 years of her history, the Church almost incessantly found herself facing more or less difficult changes and perturbations. A compelling evidence for that is in the vivid image of St. Paul’s shipwreck in the Acts of the Apostles – noticed George Weigel at the seminar organized by John Paul II Institute of Culture at Angelicum in Rome.

On Friday, December 12, George Weigel – a well-known Catholic thinker and John Paul II’s biographer, affiliated with the Ethics and Public Policy Center – led the seminar “Is the contemporary Church in crisis?”. The participants included the students of the “JP studies” course and Angelicum’s PhD candidates in philosophy and theology.

At the outset prof. Weigel explained that the current crisis in the Catholic Church should not be regarded as an extraordinary situation – throughout 2000 years of her history, the Church was almost incessantly facing more or less difficult changes and perturbations. Compelling evidence for that can be found in the Acts of the Apostles – the only volume devoted to the history of Christianity that the believers consider as divinely inspired – in the dramatic description of St. Paul’s shipwreck. John Paul II’s biographer argued that historical challenges constitute a test of faith and a call to action for Christians.

Why is the Church experiencing so many difficulties today? According to prof. Weigel, in order to understand the current crisis right, it should be seen in the light of previous transformations that occurred in Christianity. The author of Witness to Hope listed some defining moments for the Church, which preceded the contemporary predicament. The first was the transition from the primordial Christian communities to the formation of the early Church, which took place around 70 AD, together with the destruction of the Temple in Jerusalem. The next turning point was the reign of the emperor Constantine the Great, which opened the way for the patristic period of Christianity, supplying the kerygmatic dimension with the intellectual work of formulating the dogmatic foundations of the faith. This took place through dialogue between the great Church fathers with the tradition of Greco-Roman philosophy.

In the following centuries, the Church gained her full intellectual maturity and gave birth to the first, substantial synthesis of European intellectual and material culture, which produced the fruits of scholastic philosophy and gothic art. A major rift in the Christian universe occurred with the Reformation, leading in turn to the emergence of a specific, counter-reformation Catholicism. Its main goal was survival and providing a response to the subsequent waves of modern liberal, social and religious revolutions.

The realization of new challenges facing the Christian World was strengthened by the achievements of the Vatican II Council and the intellectual legacy of John Paul II.

The process of historical unrest that the Church was experiencing was concluded with the transition from the counter-reformation model to the period of New Evangelization, initiated during the pontificate of Leo XIII. At that moment modernity ceased to be regarded as an opponent of the Church, but rather as an opportunity to renew the sources of the faith, which everyone following Jesus is called to propagate. The realization of new challenges facing the Christian World was strengthened by the achievements of Vatican II Council and the intellectual legacy of John Paul II.

Prof. Weigel pointed out that a new model of Catholicism, which engages in a creative, though sometimes critical, dialogue with modernity, is developing in quite peculiar historical circumstances. Religious faith based on biblical sources ceased to be a defining factor of Western identity, and the national and ethnic identity no longer is a place of transmission of religious attitudes. This leads to the question of the Catholics’ approach to the modernizing trends, given that the possibilities of dialogue with them are narrowing down.

On the one hand, this crisis elicited the response of “liquid Catholicism” – Weigel’s analogy to Zygmunt Bauman’s “liquid modernity” – which is successively giving up the elements of its own spiritual integrity, adapting itself to the main tendencies of modernity, as it occurs in Germany, Switzerland, and the Netherlands. According to John Paul II’s biographer, this is a road to nowhere: a diluted Christianity is a worldview that, eventually, is not attractive to anyone, and leads straight to the break-up of Catholic communities.

Opposed to that is the “iron wall” vision of Christianity, which defines the limits of its doctrinal integrity with precision, and is very clear about what it can accept in the dialogue with modernity. George Weigel praised this approach and emphasized that he sees great hope in the new formation of the laity – young people who reject the intellectual absurdities of the post-modern world, guided by the sense of responsibility for the future of the Church, in which they play an active part.

Prof. Weigel’s reflections startwere followed by a lively discussion of the state of modern Catholicism and various strategies that can be adapted by both the laymen and the clergy. Dariusz Karłowicz – the founder of “Teologia Polityczna” and the initiator of John Paul II Institute of Culture – supplied the lecture with a philosophical overview of the categories by means of which the Church understands herself.

The author of The Arch-Paradox of Death pointed out that one of the significant problems of the Church today is the incorporation of the notions of the modern discourses: liberalism – which negates the political dimension of human nature and as a result prevents a sound ecclesiology; sociology – replacing the categories of the economics of salvation with the perspective of material utilitarianism; critical theory – the roots of which go back to the great propagator of the “hermeneutics of suspicion”, Nietzsche. For Dariusz Karlowicz, it is precisely the interpretation of reality from a perspective of domination and hidden violence that causes the paralysis of the affirmative approach to reality, which was the key element of classical thought, from Aristotle to St. Thomas.