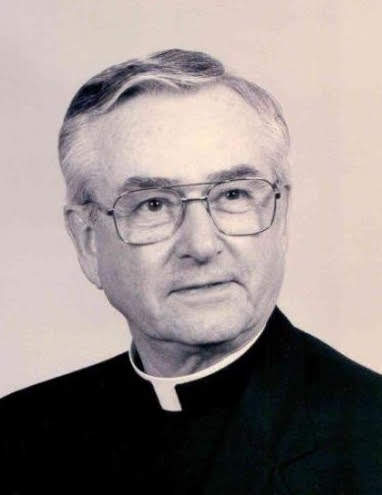 Msgr. Leroy Literski, beloved pastor and friend to many, passed away on Wednesday, January 3, 2018, at St. Anne of Winona.  He was 92.

Roy E. Literski was born on October 12, 1925, in Winona, to Frank and Emilia (Brezinski) Literski, and at the age of 6 they moved out to the farm in Rollingstone. In 1943, he graduated from Holy Trinity High School in Rollingstone, MN, receiving a wonderful education from the Franciscan sisters. He attended St. Mary’s College before transferring to the Catholic University of America in the Basselin Scholars Program, a special, three-year honors program in philosophy, and then the Pontifical North American College in Rome for further graduate studies and was ordained on December 19, 1953.  He celebrated his Mass of Thanksgiving at St. Casmir’s Church in Winona, and then began his ministry as Parochial Vicar at St. Stanislaus, Winona. From 1957-59, he went back to Rome and earned a Ph.D in Philosophy at the University of St. Thomas (Angelicum), returning home to St. Mary’s College, Winona, to teach philosophy for the next nine years and serve as chaplain on the campus.

In 1968, Fr. Literski was named the Rector of Immaculate Heart of Mary Seminary, Winona, at which time he was also made a Domestic Prelate (Monsignor).  In 1970, he was appointed pastor of St. Francis Xavier, Windom, and St. Augustine, Jeffers. In 1975, he was appointed pastor of St. Stanislaus, Winona. In addition to being pastor, he was assigned as Vicar General from 1980 to 1984, until he took on the assignment as pastor of Resurrection, Rochester, and built the new church.  In 1991, Msgr. Literski became Rector at the Cathedral of the Sacred Heart until his retirement in 1996. In addition to his pastoral assignments, he served on the Bishop’s College of Consultors, Moderator of the Winona Diocesan Council of Catholic Women and Diocesan Presbyteral Council.

Besides being a highly respected priest and friend, Fr. Roy was a beloved brother, uncle, cousin and friend to many.  He was known for his deep faith and dedication to his priestly ministry. He was sought out constantly throughout his priesthood, even in retirement, for prayer, advice, mentoring, consolation, and the celebration of Baptisms, weddings, and funerals.  He had a great love for his family and friends, as well as priestly fraternity and friendships. Most of all, he loved being a pastor.

He is survived by many nieces, nephews and cousins.

A Mass of Christian Burial will be celebrated at 11:00 AM on Wednesday, January 10, 2018, at the Cathedral of the Sacred Heart.  The Most Reverend John M. Quinn, Bishop of the Diocese of Winona, will concelebrate with Monsignor Roy’s brother priests.