Meet a New Friar on Campus 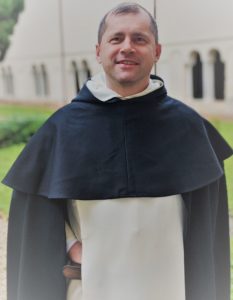 Fr. Loïc-Marie Le Bot was recently appointed the dean of Canon Law.  Below is an interview in which he shares a little bit about himself, his academic passions, and the role that St. Thomas has had in his life.

Tell us about yourself and how you came to Rome.

I am Fr. Loïc-Marie Le Bot, I’m from France, and a member of the province of Toulouse which I entered 25 years ago… Indeed, I grew up in this part of France. It was after my law studies at the University of Bordeaux that I became a novice.

I first came to Rome as a canon law student between 2001 and 2003.  I went back to my home province for two years. In 2005, I was called back to Rome to work at the Roman Curia at the Dicastery for Consecrated Life. In 2008, I obtained my doctorate of Canon Law (J.C.D.) from the Angelicum.  In 2013, I returned to Toulouse to be the dean of the Faculty of Canon Law at the University of Toulouse.  I taught religious law, Theology of Law and other courses there. I was also prior provincial of the province of Toulouse for 4 years and in 2018 the Master of the Order asked me to return to Rome to join the faculty of Canon Law at the Angelicum.

What do you hope to bring to the Pontifical University of St. Thomas Aquinas?

I came here because I was called. No doubt, the Master of the Order and the Rector thought that I could help the Faculty of Canon Law.  I have some experience teaching and working in the Roman Curia. It should also be said that I am expecting a lot from other members of our faculty and the other Angelicum instructors.

What do you most enjoy about living in Rome?

For Canon Law, certainly being in Rome is an advantage since it is here, the supreme legislator, the Roman Pontiff, resides. There is also a good concentration of canonists both in the Roman Curia (Dicasteries and Courts) and in other pontifical universities.  On a more personal level, it is a very special city for the life of our Catholic Faith.

Academically, what are your passions?

I specialize in institutional law and more specifically in religious law and the relationship between Theology and Canon Law. I also must say that I enjoy the communication and personal relationships that develop with my students in the classroom.

Why did you become a teacher of canon law?

The main reason that my superiors asked me to study this subject was for the needs of our province and the Order.  After that, I was asked to teach. I have found that teaching Canon Law is a beautiful way to be a preacher as I proclaim Sacred Doctrine in a broad sense.

How has St. Thomas helped form you to be the Friar you are today?

St. Thomas is very important for the understanding of canon law even though he did not write a treatise to comment on the code of canon law!  In his time, the law of the Church did not present itself in the same way. However, the Summa Theologia, (notably the treatise on the Law and that  of the virtue of justice) express fundamental principles for today. In the Dominican tradition we try to teach canon law under this light. Thus, Saint Thomas helps us teach.   He remains an example also in keeping the spiritual life, intellectual life and fraternal life united. He also shows how the apostolic life is ultimately always about the salvation of souls.