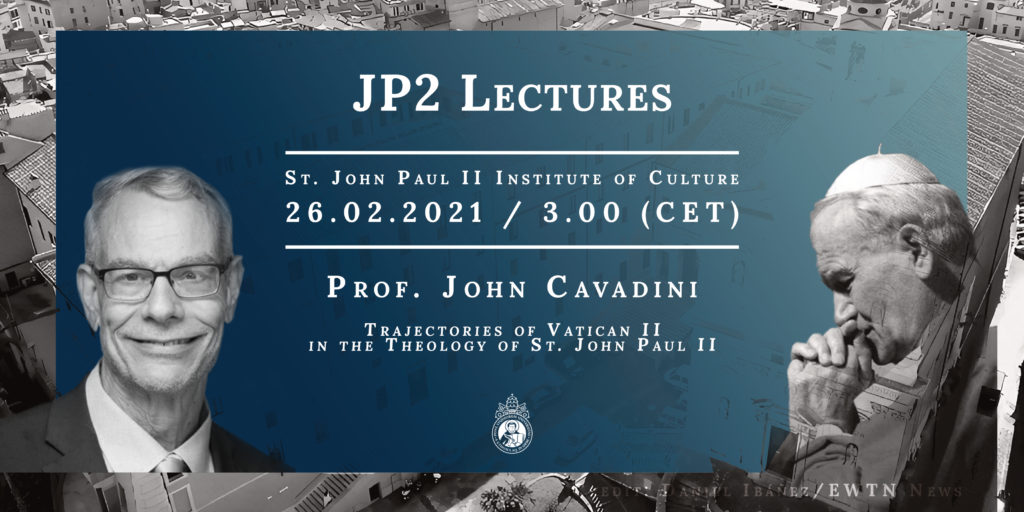 You are invited to the next talk of the “JP2 Lectures” series at the Angelicum, organized by the St. John Paul II Institute of Culture, given by prof. John Cavadini. The title of the lecture is “Trajectories of Vatican II in the Theology of St. John Paul II”. The LIVESTREAM of the lecture, which will be given in English, will start on Friday, February 26 at 3.00 PM [CET]

The lecture will focus on the ways in which he developed ideas in Vatican II in a way that attempted to engage modern culture. Using selected examples from encyclicals and writings of John Paul II, Prof. Cavadini will show how he sought to make the positions of the Church more understandable and to create a model of dialogue which does not turn into relativism.

The documents of Vatican II are all ordered toward renewing the Church’s missionary spirit. Accordingly, they emphasize the need for dialogue with modernity and its various cultures if the Church is to proclaim the Word of God in a way that is easier for it to be “heard” in the modern world. Pope St. John Paul II attempted to take the constant teaching of the Church, as it was articulated at Vatican II, and to develop it in a way that created an opening to dialogue, without at the same time compromising the teaching so that it could not effectively address the various pathologies of culture that the Council hoped the Church’s teaching could help to identify and ultimately to heal. This paper takes up several examples of this dynamic from the writings of John Paul II in order to understand more deeply his contribution to confronting the crisis of modernity even as he develops the essential insights of the Second Vatican Council.

Prof. John Cavadini – Professor of Theology at Notre Dame University and Director of McGrath Institute for Church Life. He received his doctorate in theology in 1988 from Yale University. In November 2009 he was appointed by Pope Benedict XVI for a five-year term in the International Theological Commission. Member of the Notre Dame Department since 1990. Cavadini is a researcher of patristic theology and early medieval times. He is also involved in the theology of St. Augustine and the history of biblical and patristic exegesis.

The first lecture in the “JP2 Lectures” series took place on October 19, 2020 during the inauguration of the academic year at Angelicum. The lecture entitled “Does Christianity need culture?” was given by the President of the Pontifical Council for Culture, Cardinal Gianfranco Ravasi. Watch the lecture (with English subtitles): https://youtu.be/ZwD6rbxyCTg.

Watch the lecture given by prof. John Finnis “John Paul II and the Fundamentals of Ethics”:

Watch the lecture given by abp. Rowan Williams “Faith on Modern Areopagus”:

Watch the lecture given by prof. Marek A. Cichocki “European Identity. North and South: the main line of divide”: