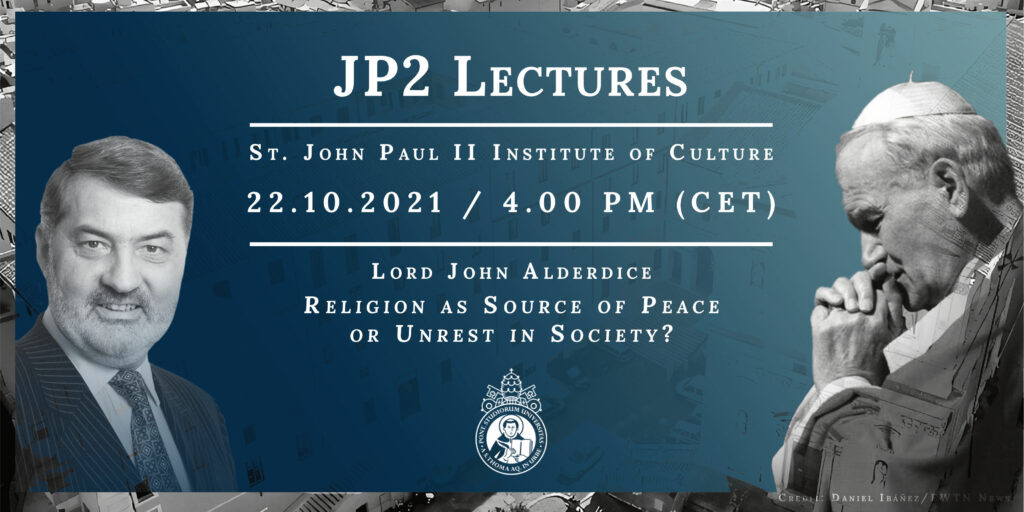 On Friday, October 22, we invite you to the first lecture of the 2021/22 series of “JP2 Lectures”, organized by the St. John Paul II Institute of Culture at the Angelicum, which will be given by John, Lord Alderdice (University of Oxford). The lecture, entitled “Religion as Source of Peace or Unrest in Society?”, will start at 4 PM (CET) in Aula 11, at the Angelicum (address: Largo Angelicum, 1, 00184 Roma).

“Religion is regularly blamed by its opponents for being a source of unrest and even violent conflict, and they are able to point to many instances in the past and the present where this appears to be the case. Adherents claim that, on the contrary, their religion is a source of peace, at a personal level as well as more widely in society. It is of course people, individually and in community, who are responsible for bringing conflict or its resolution, but how does our interpretation of our religion contribute to these outcomes and why?”
These challenging questions will be addressed by Lord Alderdice from the perspectives of psychology, politics and faith – all fields in which he has a long-standing involvement and commitment.

John, Lord Alderdice – born in 1955 in Ballymena, Northern Ireland. Emeritus Chairman of the Centre for the Resolution of Intractable Conflict, which he earlier founded and had chaired for several years. In 1996 he was appointed a life member of the House of Lords, the Upper Chamber of the British Parliament. In the last thirty years, Lord Alderdice has been involved in almost every aspect of the Irish Peace Process. From October 1987, for 11 years he was Leader of the Alliance Party of Northern Ireland and was a key negotiator of the 1998 Good Friday Agreement. Lord Alderdice’s professional background is as a clinical and academic physician and psychiatrist.

The lecture will be broadcast live at;

The monthly open “JP2 Lectures” given by scholars from around the world are offered by the St. John Paul II Institute of Culture at the Faculty of Philosophy at the Pontifical University of St. Thomas Aquinas – the Angelicum in Rome, the Roman Alma Mater of fr. Karol Wojtyła.