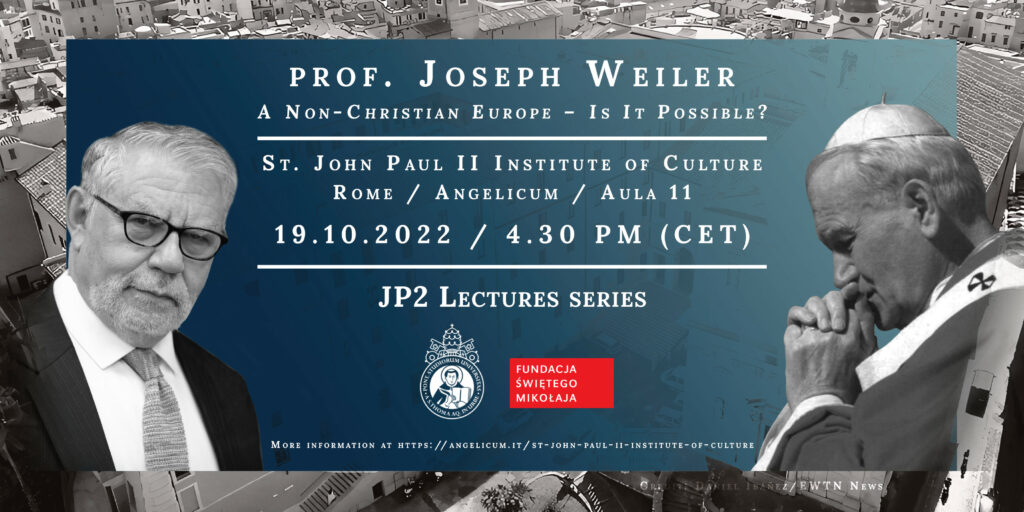 On Wednesday, October 19, 2022, we invite you to the first lecture of the 2022-23 “JP2 Lectures” series, organized by the St. John Paul II Institute of Culture at the Angelicum, which will be given by Professor Joseph Weiler (New York University School of Law).

There is only one meaningful sense in which Europe could be truly Christian: If a majority of its citizens and residents were faithful, practicing Christians. If one is to accept this as the determinant criterion, as Benedict XVI (who is to John Paul II what Joshua was to Moses) has said more than once, faithful, practicing Christians have become a minority in Europe. In this sense, a Non-Christian Europe is not merely possible, it is a reality.

This said, it is quite another thing if Europe is to become, and there are alarming signs in this respect, Anti-Christian – Christophobic. Put differently, if Europe is to turn its back on the fundamental, indispensable centrality of the Christian tradition and ethic to Europe’s cultural and moral identity and if secularism is to become the new ‘Confessional State’.

The most pressing issue is what role and strategy Christians should play and adopt in the face of this emerging reality. It is to this issue that the comments in my lecture will be addressed.

J.H.H. Weiler is University Professor at NYU Law School and Senior Fellow at the Center for European Studies at Harvard. He served previously as President of the European University Institute, Florence. Prof. Weiler is Co-Editor-in-Chief of the European Journal of International Law (EJIL) and the International Journal of Constitutional Law (ICON). He is the recipient of a doctorate honoris causa from the Catholic University of America. One of his notable books is Un’Europa Cristiana: Un saggio esplorativo which has been translated into eight languages.

Professor Joseph H.H. Weiler is the winner of the Ratzinger Prize 2022, the prestigious award that is given to scholars who stand out for their scientific research in the theological field.

(The announcement on Vatican News is: https://www.vaticannews.va/en/vatican-city/news/2022-10/ratzinger-benedict-xvi-foundation-prize-fedou-weiler.html)

The lecture will also be broadcast live at:

The monthly open “JP2 Lectures” given by prominent scholars from around the world are offered by the St. John Paul II Institute of Culture at the Faculty of Philosophy at the Pontifical University of St. Thomas Aquinas, the Roman Alma Mater of fr. Karol Wojtyła.