On June 9, at the Angelicum in Rome, a lecture by Professor Stanislaw Grygiel entitled: “A person is reborn, a person is not reformed” was held. Dariusz Karlowicz, president of the St. Nicholas Foundation and program director of the St. John Paul II Institute of Culture in Rome at the Angelicum, introduced the audience gathered in the hall and in front of the computer screens to the subject matter. 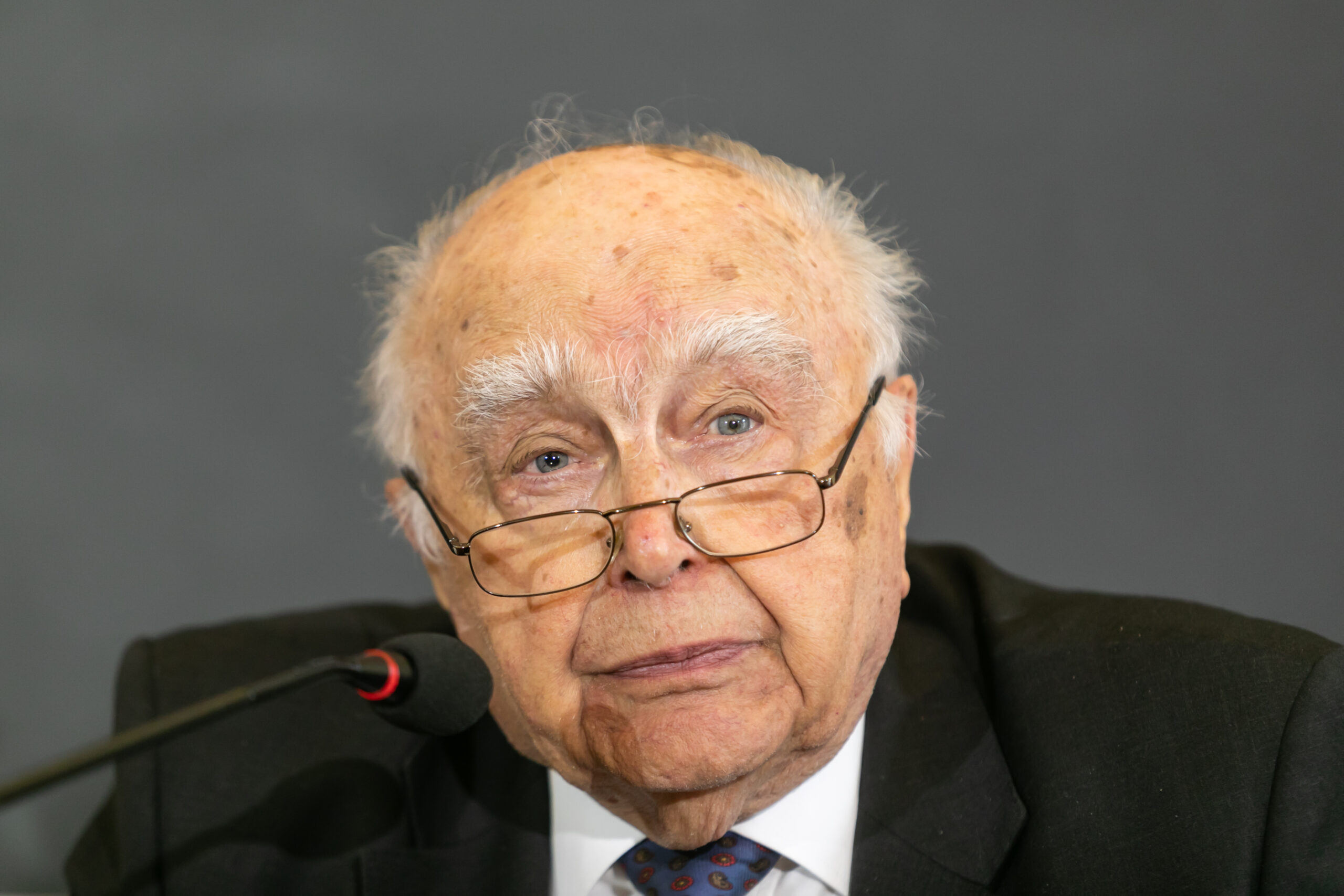 On Thursday, June 9, another and also the last lecture of this academic year was held in the series of “JP2 Lectures” organized by the St. John Paul II Institute of Culture at the Angelicum in Rome. The lecture entitled: “A person is reborn, a person is not reformed” was presented by Prof. Stanisław Grygiel.

Already at the beginning of his deliberations, prof. Grygiel presents the most important assumptions of the following considerations. He draws attention to the primary relationship of man with the living God, his union with creator Love. He also presents the philosophy of the gift of John Paul II, according to which man received from God the possibility to follow the path of truth and freedom. He contrasts it with modern reason identified with the ideas of rationalistic and technical civilization. According to the diagnosis of the speaker it is responsible for the gradual loss of man’s connection with the Christian vocation in favour of various world-view models.

According to Prof. Grygiel’s argumentation, this rupture of memory about the sources of identity understood in such a way disturbs people’s intuition and ability to enter into relationship – a true, God-love-based meeting with another person. He travesties the words of St. Augustine and says: non intuitur veritatem nisi per caritatem, that is: only love opens the eyes so that they see the truth.

From Prof. Grygiel’s perspective modernity is situated at the other extreme – it contains everything that alienates man, distances him from the encounter with the other. He describes modern man by referring to Leibniz’s lonely, windowless monads. – “A society in which there are no persons sent to other persons falls apart.” – he says. In contrast, “the beauty of truth and goodness happens and manifests itself in persons mutually present to one another. Their beauty is a gift, a gratia. The lives of the persons between whom truth happens tell the story of the fulfillment in them of the beauty of the grace of truth, gratia veritatis.”

Later in the lecture, again returning to the analysis of modernity, Grygiel speaks of a kind of homelessness to which it leads by destroying the foundations of original settlement. – “Homeless people are not ‘resurrected’ because they have no one to resurrect in.” – he concludes.

In the next step, Grygiel transforms the phrase Ecclesia semper reformanda into Ecclesia semper renascenda. He also relates this directive to man who, as a result of the modern processes, has fallen into an existential void that is going nowhere. According to Grygiel, the same mechanism applies to marriage, family, and the nation. Grygiel derives the concept of reformation from Heidegger’s approach to the object – one reforms sets of objects or “the structure of technical action, but not freedom, that is faith, hope and love, which a person in a personal community becomes,” he says.

He derives the notion of reformation from Heidegger’s approach to the object – one reforms sets of objects or “the structure of technical action rather than freedom, that is, faith, hope, and love.

He goes on to recall his seminar with Karol Wojtyla and his consideration of Sartre’s philosophy, which, in Wojtyla’s words at the time, “will help us understand the coming secularization of society. His vision of absolute freedom will hit Marxism, but then it will hit us.” In the lecture, it is contrasted with the Genesis story, which speaks of the true relational identity of man – “The beauty of love transforming a person selflessly present for another into someone full of grace (gratia plenus) delights others to work for the resurrection,” says Grygiel.

Another opposition presented in the lecture is the Word of God and the so-called “Antisense” that destroys culture in people, “so that instead of becoming beautiful persons they become ‘polite’ citizens of the state, obedient to its administrators,” – he concludes.

Grygiel notes that Wojtyła’s approach to man is mystical and poetic in nature. He talks about the experience of the beauty of the human body understood by John Paul II as a clearing through which the light of transcendence penetrates. It is in this clearance that both the truth and goodness of the person are revealed.

In the final part of the lecture, Prof. Grygiel draws attention to the Pope’s special attitude to every human being. – In every person he saw someone on fire with God, even when the one he approached did not know that he was on fire with Him. He approached each person with bowed head and entered their home barefoot, because he knew that he was entering holy ground. He entered the homes of others as one enters a temple (templum) to contemplate the fire of Love, which is God. The verb con-templor, -ari and the noun con-templatio speak about such a union with another person in the temple of love,” he described John Paul II’s attitude.

Grygiel concludes his reflections with a question. – Will “the Son of Man find faith on earth when he comes?” (Luke 18:8). As he points out at the end of his lecture, the way to it is courageous contemplation, which has the power to protect man from the dangers of the modern metaphysics of nothingness.