On Wednesday, November 30, 2022, another JP2 Lecture organized by the Angelicum’s St. John Paul II Institute of Culture was given by Professor Mirosława Grabowska (University of Warsaw/Public Opinion Research Center). The lecture was titled “Secularization in Europe: Theory and Reality”. Dariusz Karlowicz, president of the St. Nicholas Foundation and program director of the St. John Paul II Institute of Culture at the Angelicum, introduced the audience gathered in the hall and in front of computer screens to the subject. 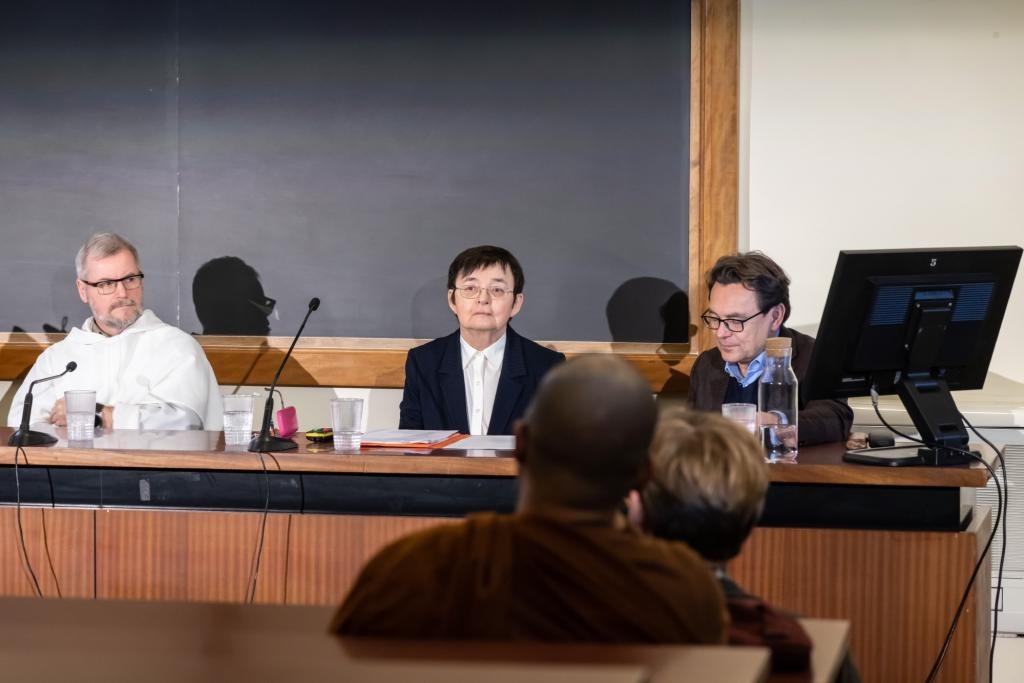 Beginning her speech, Prof. Miroslawa Grabowska said that in her lecture she would be juxtaposing theoretical models describing the processes of change in religiosity with empirical data. As Prof. Grabowska pointed out, the role of theory is to describe the phenomenon or process of interest and to explain it: to identify the causes, to indicate the mechanisms behind the phenomenon or process, to define the relationships into which the phenomenon or process enters. She went on to distinguish three theoretical approaches to the processes of religious change that address this challenge: the secularization theory, the historical-sociological approach and the individual-biographical approach. All three theories are helpful in describing changes in religiosity, but they fail when we want to explain these changes.

Secularization theory is rooted in the concepts of the Enlightenment, evolutionism and modernization theory. Its classic version was articulated in the 1960s and 1970s. The author of the first empirical analysis covering the processes of religious change that spanned many countries was Ronald Inglehart. In his first book, The Silent Revolution, he argued that with the transition from pre-industrial to industrial and post-industrial societies, there is a change in people’s values: from materialistic to post-materialistic (self-realization) values. Along with these changes, religious practices are declining. The theory of secularization emphasizes the role of the broader process of modernization and related factors: economic development, expansion of social welfare systems that provide existential security (health care system) and social security (social policy).

In the historical-sociological approach, researchers emphasize the role of historically shaped cultural, social and political factors, political and public institutions, but also influential circles. The most prominent representative of this approach is considered to be Charles Tylor, who first in his lectures on William James and in his later and monumental book A Secular Age distinguishes and characterizes three types of ideal socio-political-religious order: the Paleodurkheimian, Neodurkheimian and Post-Durkheimian. In the Paleodurkheimian order, the individual has access to and a relationship with the sacred through the “unity” that is the Church and society. The individual is immersed in this unity, with virtually no choice, although there are outsiders and heretics. In the neo-Durkheimian order, there is no longer a unity between Church and society. The state is singled out as a political and social entity, and the Church can be in alliance with the state or not, while the individual gains some choice: he belongs to the state and to the denomination of his choice. In the post-Durkheimian order, there is no place for religion in the public sphere, and there is no connection between national and religious identity. Spiritual life is completely privatized and individualized.

The individual-biographical approach uses qualitative research – biographical interviews, in-depth interviews, etc. It examines processes occurring at the level of individuals: their life experiences, identity, understanding of themselves in close social settings: family, school, peers. As a result of this research, three main areas of religious life stand out, which seem to be crucial for the development of religious young adults: (a) strong ties to highly religious parents, other adults and friends, are more likely to maintain or increase their faith and religious practice as they enter early adulthood (the role of socialization, belonging to a circle of loved ones); (b) the development of an internalized belief system that includes faith that is personally important (identity formation: individual, family and ethnic); (c) religious practices teach faith, shape identity and accumulate religious capital.

Later in the lecture, Prof. Grabowska noted that Poland was, and still is, regarded as a country that – from the point of view of secularization theory – is an exception: where the process of secularization is not progressing or is progressing with a significant delay and very slowly. Meanwhile, relatively rapid secularization and the fundamental role of generational change in this process have been observable in Poland for at least several years, as documented by international and domestic studies – including CBOS surveys and analyses. Over thirty years, the percentages of declarations of faith, although declining, remain high. In 1992, believers (deep believers and believers) accounted for 96% of respondents, and in 2022 – 87%. By contrast, the percentage of non-believers (rather non-believers and total non-believers) is growing, with 5% in 1992 and 13% in 2022. As of 2019, we notice a clear acceleration in the process of abandonment of religious practices – the percentage of declarations of non-practice across the population exceeds 20%, which, the sociologist said, may be related to the publicity of pedophile scandals in the Church.

Finally, Prof. Grabowska, related the characterized theoretical approaches on changes in religiosity to Polish society. As she pointed out, certain changes in the religiosity of Poles are in line with the predictions of secularization theory: people with higher education, residents of large cities, as well as younger people are characterized by lower levels of religious faith and practice. The historical-sociological approach brings profound and significant insights into the religiosity of Polish society, bringing out the connection between Polish religiosity and national identity. The individual-biographical level approach, on the other hand, yields rich, almost literary descriptions of the religiosity of individuals from small social groups and small size categories, which in Poland characterize Polish outsiders rather than Polish society.

Mirosława Grabowska – professor, sociologist. Her interests include sociology of religion, sociology of politics, and social research methodology. She is the author/editor of 17 books and over 100 articles. The book Building Democracy. Social Divisions, Political Parties and Civil Society in Post-communist Poland (2001, 2003), written with Tadeusz Szawiel, was awarded by the Polish Academy of Sciences, and The Post-communist Cleavage. Social Bases of Politics in Poland after 1989 (2004) was translated into English and published by Peter Lang Publishing in 2021. Her most recent book on religiosity is God and the Polish Case. Beyond the Limits of Secularization Theory. She has been a visiting professor at Stanford University, at The Institute for Advanced Study, Princeton, at the University of Wisconsin – Madison, and at Johannes Gutenberg University Mainz. She was elected Director of Public Opinion Research Center (CBOS) in 2007, in 2012 and in 2017 for the term 2018-2023.