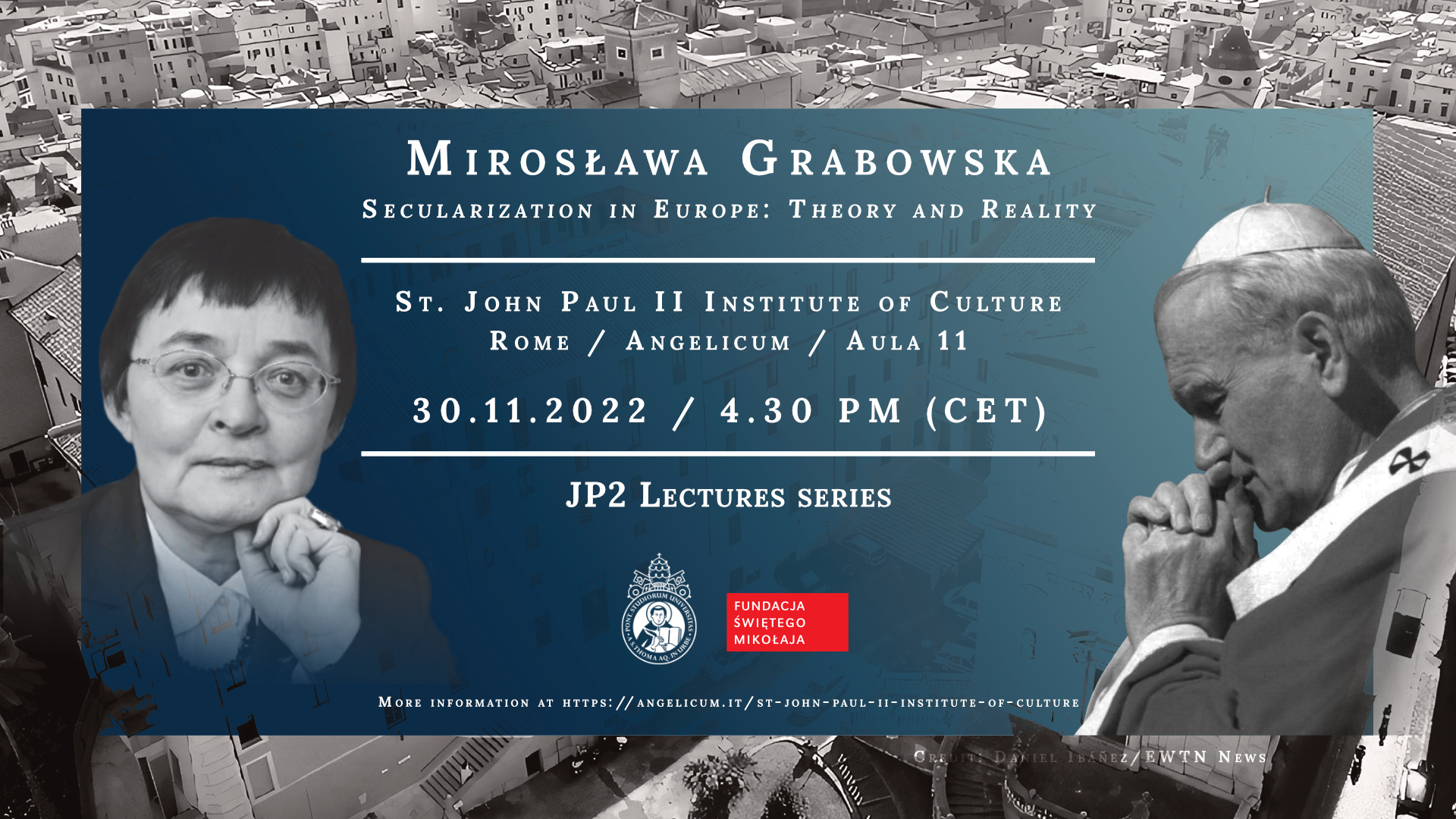 On Wednesday, November 30, 2022, we invite you to the next JP2 Lecture organized by the Angelicum’s St. John Paul II Institute of Culture, which will be given by Professor Mirosława Grabowska (University of Warsaw/Public Opinion Research Center). The lecture entitled “Secularization in Europe: Theory and Reality” will begin at 4:30 p.m. (CET) in Aula 11 at the Angelicum (Largo Angelicum, 1, 00184 Rome).

The title of the lecture defines the issue very broadly: it is supposed to be about of both the theory of secularization and the actual, empirical processes of secularization, or rather the processes of changes in religiosity. From such a wide-ranging subject matter, the following are selected for discussion:

Mirosława Grabowska – professor, sociologist. Her interests include sociology of religion, sociology of politics, and social research methodology. She is the author/editor of 17 books and over 100 articles. The book Building Democracy. Social Divisions, Political Parties and Civil Society in Post-communist Poland (2001, 2003), written with Tadeusz Szawiel, was awarded by the Polish Academy of Sciences, and The Post-communist Cleavage. Social Bases of Politics in Poland after 1989 (2004) was translated into English and published by Peter Lang Publishing in 2021. Her most recent book on religiosity is God and the Polish Case. Beyond the Limits of Secularization Theory. She has been a visiting professor at Stanford University, at The Institute for Advanced Study, Princeton, at the University of Wisconsin – Madison, and at Johannes Gutenberg University Mainz. She was elected Director of Public Opinion Research Center (CBOS) in 2007, in 2012 and in 2017 for the term 2018-2023.

Furthermore, on Thursday 1 December, we invite Angelicum students to attend a seminar with Prof. Grabowska from 10.30 to 11.30 am in Aula 14, for a discussion following the lecture (registration for the seminar via email at: [email protected]).

Both the lecture and the seminar will be held in English.