The image of Divine Mercy has been painted anew! This extraordinarily demanding challenge, both artistically and spiritually, was faced by 11 Polish painters, who have been invited to cooperate with two institutions – Saint John Paul II Institute of Culture of the Pontifical University Angelicum and the Saint Nicholas Foundation. The paintings will now be presented to a wider audience. This is an introduction to a larger undertaking, which aims to revive religious painting in Poland. 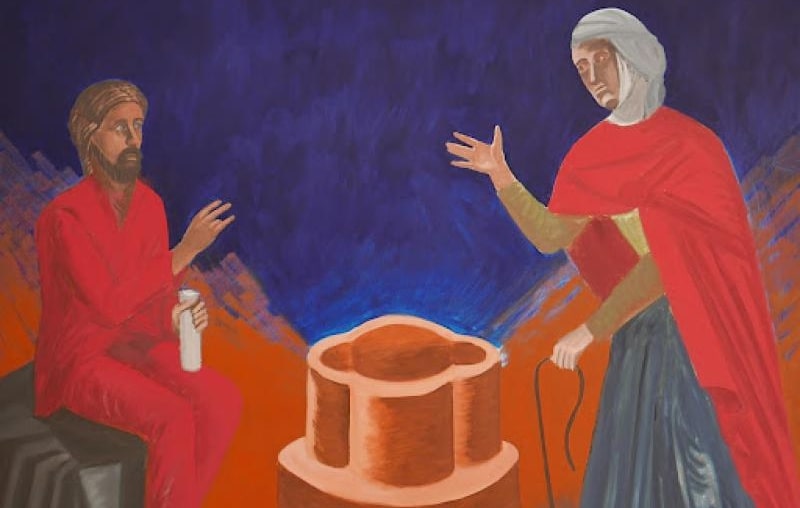 In order to help the artists face this difficult challenge two lecture sessions in Wigry and in Gościków-Paradyż were held, during which Bishop Jacek Grzybowski, Dr. Dorota Lekka and Dr. Izabela Rutkowska tried to shed some light on the issue of Divine Mercy from different perspectives – from the standpoint of theology, from documents of the Church and papal teaching on art as well as all the notes referring to the image of Christ, included by s. Faustina in her “Diary”. The two sessions also included a presentation of existing images of the Merciful Jesus, which highlighted the variety of approaches to the topic in the past decades as well as the danger of taking an arbitrary approach and departing from the essential instructions of the Principal.

– Church documents clearly state that great art should be present in churches, but the practice is different. It is a great problem for art as without sacrum it becomes empty, eats its own tail, does not lead anywhere, and at best becomes journalism or decoration,’ says Dariusz Karłowicz, the president of the Saint Nicolas Foundation and the initiator of the project. – We start from the main theme, from the center of Christian life and from the center of religiousness of our times, from the image of Divine Mercy,’ Karłowicz continues.

The organizers of the project strongly emphasize that what they want are not just copies of the existing images, but works of high artistic quality expressed in the contemporary language of painting. These paintings, although being an emanation of individual artistic sensitivity, were made – which is of crucial importance – according to the instructions written by Sister Faustina in her “Diary,” so that they can serve a cultic purpose.
– In Sister Faustina, in St. John Paul II, in Blessed Stefan Cardinal Wyszyński, in Blessed Michael Sopoćko we see the pioneers of the idea of Mercy. We want it to be expressed also in works of art. So that artists-painters, sculptors, composers, writers could at some point realize that this is something of which we can be proud,” emphasized Bishop Jacek Grzybowski, who was present at the meeting with the artists.

– For the time being I see the subject of Divine Mercy as my greatest challenge. We will see how I deal with it. I have a sense of a certain beginning, of initiating something very important. Something that has never been present in this form – says Jarosław Modzelewski, painter, draughtsman, educator, co-founder of the famous “Gruppa“, who was present at the meeting in Wigry. – I feel a sense of action, which was initiated, and which is also a kind of drive that awakens the will to face this subject. With all the fears that are obviously present,” he adds.

The organizers, aware of these concerns, tried to help the artists introduce the subject matter related to the image of Divine Mercy. Not only a series of lectures but also a one-day trip to Vilnius to see a painting by Eugeniusz Kazimirowski – the first work of art created after s. Faustina was instructed by Christ to paint the image of Mercy incarnate and the only one whose final shape was truly influenced by s. Faustina.
After visiting Vilnius, Jaroslaw Modzelewski noted the power of this image, now placed in the main altar of the Holy Trinity Church and for several years elevated to the status of the Vilnius Divine Mercy Shrine. – The vision, fortunately, is not as binding as the image that already exists is binding. Here is the key that needs to be created to deal with this issue. We know what the figure is supposed to look like, but fortunately not very precisely. So we will try – said the artist.

Painting the image of Divine Mercy is not a challange only for Jarosław Modzelewski. All those who undertook the task admit to struggling with the theme. Krzysztof Klimek, associated with the Cracow-based Otwarta Pracownia (Open Studio), even said that painting the Divine Mercy image was “a crazy challenge” for him. – I have made a few copies of the painting from Lagiewniki before, and with quite good results. But those were copies. It is a completely different thing to produce a painting as if Sister Faustyna had come to me. We have to think about it in a completely different way, to get rid of certain stereotypes. I hope that this image will appear in me – he admitted with emotion.

Jacek Dłużewski, Professor of the Academy of Fine Arts in Wrocław, also spoke about the need to think about the theme of Divine Mercy in silence. – This theme is not an icon to be duplicated, but a living form to be shaped with contemporary language, so that this contemporary painting form would be a response to the painting theme, which is still present – he said.
A somewhat different aspect was pointed out by Beata Stankiewicz, a well-known painter from Cracow, who indicated that in spite of a rather rigid painting framework, the lectures she attended reassured her about artistic freedom. – I feel safer knowing the boundaries, knowing which things or symbols are necessary and what must be included in the painting. When I know clearly what the area of my artistic freedom is, it gives me a great sense of creative security,” Beata Stankiewicz said in a short interview, adding that being able to use contemporary language and not giving up her own style while painting the image of Jesus is extremely important to her.

– I am simply happy and delighted with the opportunity to paint The Divine Mercy,” said Wojciech Głogowski, a painter from Wrocław. – I consider the invitation to this project as a matter of providence,” he said, adding that “maybe the point of all this is that the Lord Jesus, through this new painting, will also speak to other people, to those who, through older versions, may have a more difficult access to Him.
Ignacy Czwartos, co-founder of the Otwarta Pracownia Association, confessed before our editorial camera: “I have been preparing for such moments throughout my entire painting career, that is, for almost 30 years. – While creating abstract and figurative paintings, or combinations of figuration and abstraction, I very often thought of sacral painting. My desire was to paint something for the Church, but despite various delicate attempts, I did not manage to establish a closer cooperation. Now, however, such an opportunity has come and I am very happy about it – said the artist hopefully.

The artist’s words echo a problem that has been growing for years – the ever quickening divergence of the ways of the ecclesiastical world and high culture, over which many commentators can only wring their hands. The project carried out on the initiative of the Saint Nicholas Foundation (Political Theology) and the Saint John Paul II Institute of Culture at the Angelicum goes against this pessimistic mood, having the ambition to put in its own brick to stop this process.

That is why the painting of the Divine Mercy image is only the first step in what is planned for the future. In the following years, the St. John Paul II Institute of Culture and the St. Nicholas Foundation will invite artists to face other subjects, which are key to Christian faith and imagination, and at the same time have been important to the heritage of European culture for centuries.
Finally, it must be said that another aim of the project is not without significance. It is an attempt to revive the Church’s patronage of high culture. The emerging awareness of such a need in the circles of the Church was indicated by Bishop Jacek Grzybowski, present at the meeting with artists, who said in Wigry that “we have forgotten that culture is often the first, and sometimes the best, element of evangelization. That through good art and good culture we can reach the masses of people”.
Invitations to the present project have been accepted by: Jarosław Modzelewski, Krzysztof Klimek, Jacek Dłużewski, Beata Stankiewicz, Wojciech Głogowski, Ignacy Czwartos, Bogna Podbielska, Artur Wąsowski, Damian Bąk, Jacek Hajnos and Wincenty Czwartos.