The Concept of “Ius” in Thomas Aquinas 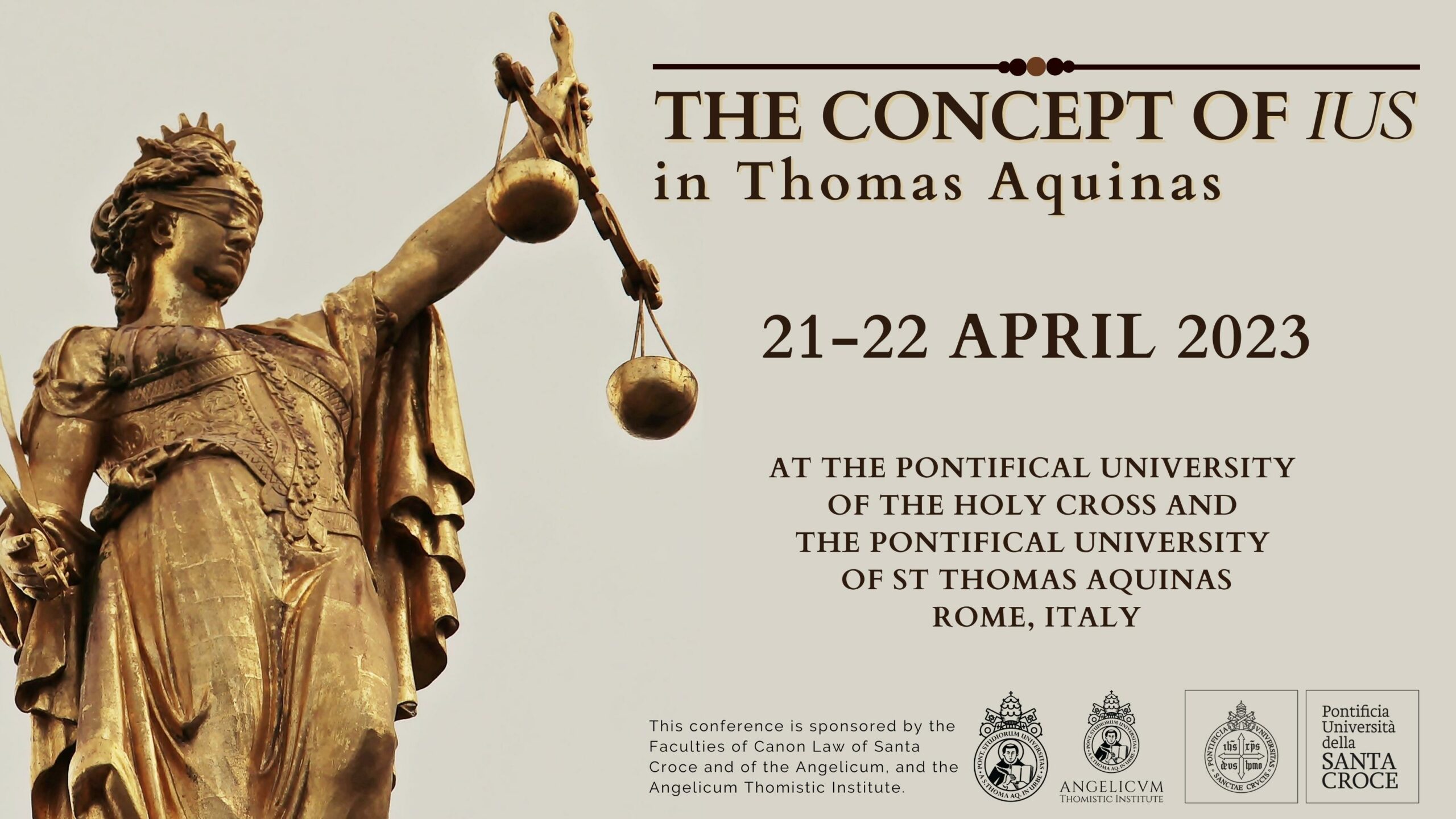 The Concept of Ius in Thomas Aquinas

The Conference intends to explore the Thomistic concept of ius as it is presented in Thomas Aquinas’s treatise on ius and iustitia in the Secunda Secundae of the Summa Theologiae, that is, as the object of the virtue of justice and as the just thing itself (ipsa res iusta). This analysis takes into consideration the entirety of Aquinas’s account of lex from the Prima Secundae of the Summa Theologiae, as this account is interrelated with his understanding of lex as a ratio of ius (S. Th. II-II, q. 57, a. 1, ad 2). The Conference also aims to analyze the inherent connection between justice which has ius as its object—what might be called a juridical aspect of iustitia—and broader issues of the salvific and moral aspects of justice.

To complete this analysis, it is necessary to inquire into Aquinas’s historical and doctrinal sources, the relevant texts in which he elaborates his account of ius, justice, and lex, as well as the reception of his juridical thought down the centuries until the present day. To this end, the Conference will also reflect on contemporary assessments of the tension between the objective and subjective meanings of ius both in Aquinas’s thought and in the Thomistic tradition. In addition, the Thomistic foundations of the notion of ius and of the virtue of justice will be explored, together with research into the interconnectedness between justice, the concept of good, and practical reasonableness.

The Conference aims to show how the analysis of the Thomistic concept of ius, rather than being only of historical interest, may prove to be fruitful for present-day issues in legal theory, as well as for a dialogue with contemporary legal-philosophical conceptions of the juridical phenomenon, law, and rights. While recognizing the relevance of this fruitfulness for the life of law at all levels of research, the Conference highlights the particular relevance of the Thomistic vision of ius for the social teaching of the Catholic Church and for canon law.

9:30 AM   | The Concept of Ius in Aquinas: Analysis of Texts and Sources
Petar Popovic

10:30 AM | The Eclipse of Aquinas’s Objective Meaning of Ius in the Thomistic Tradition from the Spanish Scholastics until Its Rediscovery in the First Half of the 20th Century
Jean-Pierre Schouppe

12:00 PM | The Reception of Juridical Realism in the 20th and 21st Centuries
Carlos José Errázuriz

3:00 PM  | Conclusions from the Debate on the Thomistic Concept of Ius between its Objective and Subjective Meanings
Thierry Sol

4:30 PM  | Prospects for the Inclusion of the Thomistic Concept of Ius (Right/Law) in Contemporary Legal Philosophy
Jeffrey Pojanowski

9:30 AM  | The Analogies of Justice: Aquinas on Justice as a State, a Virtue and a Juridical Reality
Michael Sherwin, OP

10:30 AM | The Interconnectedness between Justice, Law, and the Concept of Good: Thomistic Premises for the Concept of Ius as Juridical Good
Dominic Legge, OP

12:00 PM | The Conformity between Ius as the Object of Justice and the Virtue of Charity According to Aquinas
Catherine Joseph Droste, OP

3:00 PM   | The Role of Aquinas’s Concept of Ius in the Social Doctrine of the Catholic Church
Russell Hittinger

Registration will open in autumn 2022.