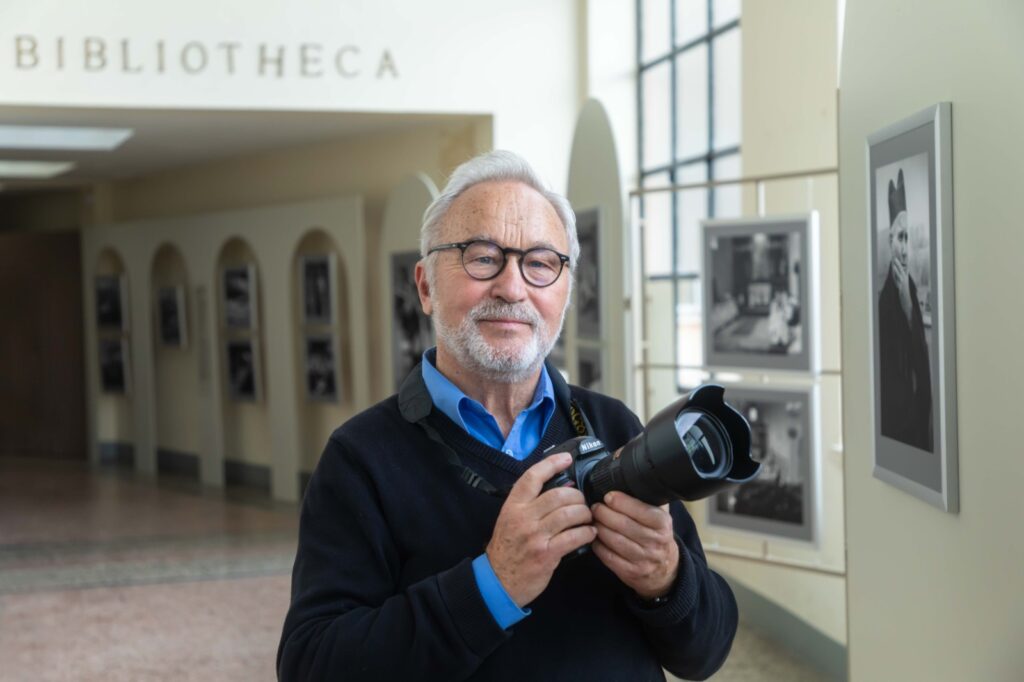 In the evening of Friday, October 22, the exhibition From Cracow to Rome. John Paul II in the Photographs of Adam Bujak was opened at the Pontifical University of St. Thomas Aquinas in Rome. The event was part of the inauguration of the unique, interdisciplinary JP2 Studies program at the Angelicum, and of the second annual series of public JP2 Lectures. On this occasion, John, Lord Alderdice (University of Oxford) gave the first talk in this academic year: “Religion as a Source of Peace or Unrest in Society?”

The exhibition is a joint initiative of the Angelicum, Adam Mickiewicz Institute, the National Museum in Krakow, Polish Institute in Rome, and Saint Nicholas Foundation. Among the guests who attended the opening of the exhibition were Arkady Rzegocki, Head of the Foreign Service of Poland, Anna Maria Anders, Ambassador of Poland to Italy, Janusz Kotański, Ambassador of Poland to the Holy See, the founders of the St. John Paul II Institute of Culture, as well as numerous international students and scholars of the Angelicum, including students of the JP2 Studies program. The author of the photographs, Adam Bujak, was also present at the event as a special guest. On behalf of the organizers the exhibition was attended by Fr. Thomas Joseph White OP, Rector of the Angelicum, Fr. Serge-Thomas Bonino OP, Dean of the Faculty of Philosophy, Fr. Benedict Croell OP, Director of Development & Mission Advancement of the Angelicum, Fr. Cezary Binkiewicz OP, Director of St. John Paul II Institute of Culture, Barbara Krzeska, Deputy Director of Adam Mickiewicz Institute, Andrzej Szczerski, Director of the National Museum in Krakow, Łukasz Paprotny, Director of the Polish Institute in Rome, as well as Dariusz Karłowicz and Joanna Paciorek, President and Vice-President of the Saint Nicholas Foundation. The pictures presented in the exhibition were selected by the curator of the National Museum in Krakow, Magdalena Święch, together with the author, Adam Bujak.

The lecture “Religion as a Source of Peace or Unrest in Society?” was the first of the series of talks by renowned intellectuals, which will run for the next two semesters. Lord Alderdice is an experienced psychiatrist and a politician, recognized for his contribution to the Northern Ireland peace process. In his speech he focused on defining the concept of religion, on issues related to divisions and socio-political tensions, as well as ways of overcoming them by various members of various religious groups and denominations. Lord Alderdice highlighted the importance of an open approach to non-believers and of seeking understanding by forming personal relationships among people of various groups and societies. He praised John Paul II for his contribution to ecumenical and interreligious dialogue and the ground-breaking opening of Catholics to scientific circles, to which the pope was unprecedentedly favorable. After the lecture, Dariusz Karłowicz, president of Saint Nicholas Foundation and editor-in-chief of Teologia Polityczna magazine, chaired the discussion, which concentrated on the matters of dialogue and searching for solutions to the current problems of Western societies by members of various Christian denominations.

During the official opening of Adam Bujak’s photographs exhibition, director Fr. Cezary Binkiewicz OP welcomed the guests on behalf of St. John Paul II Institute of Culture. Rector Thomas Joseph White OP spoke on behalf of the Angelicum authorities, recalling the Polish pope’s celebrated words “Do not be afraid. Open wide the doors for Christ”, which guide the spiritual and intellectual pursuits of the entire Angelicum academic community. Barbara Krzeska, deputy director of Adam Mickiewicz Institute, and prof. Andrzej Szczerski, director of the National Museum in Krakow were the next speakers. The exhibition was officially opened by prof. Arkady Rzegocki, the chief of Poland’s Foreign Service.

The exhibition counts almost 200 photographs, which mainly tell Karol Wojtyla’s story before he became the pope. They depict both his personal life and public engagement in significant moments of his home country and city’s history. We can see the pictures of his famous skiing excursions, sneak into his modest rooms, but also – together with the artist – experience again the construction of the church in Nowa Huta, the crowded celebrations of the Millennium of the Baptism of Poland, or the students’ White March, which took place on the streets of Cracow after the terrorist attempt to kill the pope in 1981. Through the person of Karol Wojtyla, Bujak seeks to speak about his and the pope’s beloved city and fatherland. Besides the pictures, the audience appreciated the exhibition arrangement, which perfectly fits into the university’s interior. After the official opening, the guests had an opportunity to take the curator’s guided tour with Magdalena Święch.

The exhibition will be displayed at the Angelicum until December 9, 2021. Over the next months, St. John Paul II Institute of Culture will continue the JP2 Lectures series. The speakers will include George Weigel, Andrea Riccardi, Carl Anderson, John Milbank, Ewa Thompson, and Stanisław Grygiel. The next event will be Jean-Luc Marion’s lecture „The phenomenological openness of Revelation”. Professor Marion is a member of the Academie Française and a professor at the University of Chicago. The live transmission will be accessible on Youtube. For more information, click here. 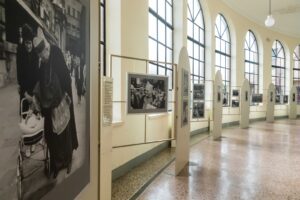 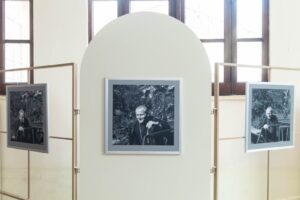 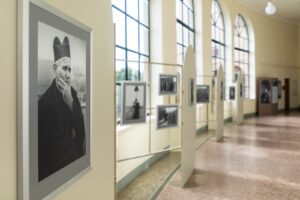 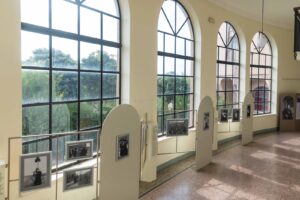 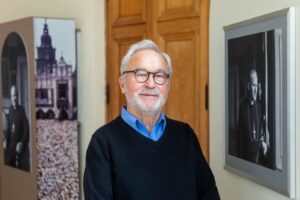