“If we look at the history of art, the most profound mysteries, like the Annunciation, or the Nativity, or the Crucifixion are depicted cyclicly down through the ages in new ways. The re-depiction of the Divine Mercy could be thought of as a respectable attempt at epochal transference and continuation, a re-creation or re-articulation of that perennial mystery of the importance of that message for our own epoch in a slightly different key” – Father Thomas Joseph White OP said in an interview about the project of the Saint Nicholas Foundation and the St. John Paul II Institute of Culture to restore sacred art. 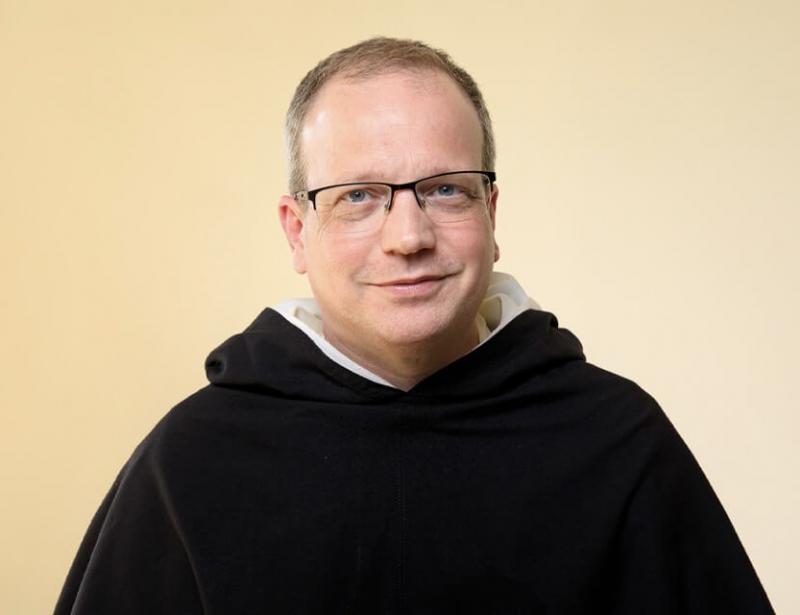 Karol Grabias (The Saint Nicholas Foundation): “Last year in September you became rector of the Angelicum. What do you think are the main challenges you face as someone at the head of the pontifical university whose roots go back to the 13th century? And what place among them does the newly created St. John Paul II Institute of Culture have?“

Thomas Joseph White OP (Angelicum): The seven pontifical universities in Rome have a central mandate to teach and conduct research in the name of the Holy See so as to foster and cultivate intellectual excellence in the service of theology, philosophy and other associated sciences. The Angelicum has an important heritage in this larger ecosystem of the pontifical universities because it houses the central vehicle for the promotion of the thought of Saint Thomas Aquinas and the thomistic tradition – at the heart of the Church in Rome and in collegiality with the other pontifical institutions. Thomas Aquinas is obviously the common Doctor of the Catholic intellectual tradition because his thought has the kind of universality in its range of subjects, its metaphysical profundity and in his searching understanding of central Christian mysteries. A key challenge for us is to maintain, explore and re-articulate the centrality of this intellectual tradition in our own historical and cultural moment. However, we also, of course, need to be creatively and receptively engaged with a wider range of intellectual traditions and contemporary cultural developments, not least in Europe where we live and where the Church has its historical origins. The example of John Paul II is vital. He demonstrated the capacity of the Church in her intellectual and artistic life to welcome many ressources from the classical and medieval era while also making important discernments about the contributions of the modern era. John Paul II was a pivotal modern Christian intellectual who brought to the forefront the vital thinking for the world at large about the centrality of human dignity, the nature of the human person, natural openness to Divine transcendence, the reasonableness of accepting Revelation and all the ways this interacts with the culture of human rights and human justice as well as education and the arts. Consequently, having the center, such as St. John Paull II Institute of Culture in the Angelicum is a key ressource for us today to be able to continue the legacy of John Paul II in his example and in new applications, so as to welcome the world’s most significant Christian intellectual figures as well as artistic and cultural figures to contribute to the ongoing intellectual life of the Church in Rome.

How do you assess the achievements of the St. John Paull II Institute of Culture so far? Does the perspective introduced by the reflection on the intellectual output of John Paul II occupy an important place in the contemporary Church?

The Institute has only existed for about a year and a half and in that time it’s undertaken a number of important and ambitious events which have been very fruitful. We had a number of major intellectual figures we’ve been able to host to the university and take new initiatives to promote the thought of John Paul II for younger generations of students. This is entirely appropriate because the legacy of John Paul II continues to be of vital importance. It’s obvious that the teaching of the pontificate of John Paul II has shaped virtually everyone who is in ministry in the Church today, especially priests of my generation, for example. What’s interesting to wonder or question is how significant the influence will be on the younger generation. I think that the challenge is to do that in a twofold way: one is to receive and study the rather important contribution of the Magisterium of that era, of that epoch, and the second is to think creatively about how principles that were articulated then are applicable now. The Institute is inaugurating that conversation in a very creative way that isn’t mere repetition nor mere innovation. We have to avoid both: mere repetition and mere innovation and I think the Institute is walking the line between the two in a very healthy way.

The figure of John Paul II occupies a rather important place in the spiritual culture of Poland because of its origin. How his legacy looks from father’s perspective ̶ both as rector, philosopher and as someone who does not look at the Pope through the prism of Polishness.

Well, I’m an American and in my generation John Paul II was a giant figure in the American Church. Obviously, this had to do in part with his teaching from the first encyclical onward, regarding the metaphysical foundations of human dignity and identity in the face of the modern political crises, not at least the confrontation with Soviet communism but also in regard to the crisis of rational foundations of human ethics. This was continued and deepened in the pivotal encyclicals: Evangelium Vitae, Veritatis splendor, Fides et ratio. I think Veritatis splendor remains the most important Magisterial document of the Catholic Church of the last few decades because it confronts a central intellectual crisis of our age concerning the foundations of moral philosophy and the principles of ethical flourishing. I think that document especially sets the basis of Christian thinking back on the right foundations that had been neglected, concerning human happiness, virtue, the problem of evil and the promise of good. But he allied this with the deeper search for the truth and the human search for ultimate explanations that is underscored in Fides et ratio. So this, you may call it modern humanism of John Paul II, is of a completely actual importance for the culture today. I think, even more so in some respects as we’ve fallen more and more into a cultural pragmatism, market economy, technology without a deeper sense of metaphysical foundation and profound ethical values. So, there are less and less ressources available to the average person to achieve a kind of wisdom regarding the meaning of human existence. John Paul II was able to ally this with the profound theological understanding of the mysteries of the faith, which he wrote about beautifully and the mystical and spiritual life which he was able to make attractive to people in the midst of the secular world today. This triple alliance between profound philosophical vision of the human person, deep theological investigation of the mysteries of Christianity and the truth of Christianity centered on the person of Jesus Christ, and the mystical and interior life that allows us to endure through life’s challenges and make those spiritual challenges fruitful with authentic love and contemplation. This is at the core of his mission and his examples to the Church and it remains something very valuable as a witness in the midst of the 20 th century and for the 21st century.

I find really interesting what you’ve just told about the lack of resources to achieve wisdom… But let’s go back to the initiatives of the St. John Paul II Institute of Culture. The Institute is one of the organizers of the project “Let’s Paint Catholicism Again”, which aims to create a new rendition of the image of God’s mercy. How do you assess this project from the theological perspective: does the concept, so crucial for Christianity, as mercy, require renewed representation in art?

The first thing I would say is that there is a fundamental challenge in the Church and in the culture today, the culture at large, to rebuild the connection between pictoral art and the depiction of the sacred. All too often now the artistic community explores ideas separated from classical Christianity as an inspiration and the Church depicts the sacred with too little input from the greatest resources of the artistic community. So the project is audacious, daring and I hope it can succeed. The key is to invite people of the highest artistic talent, to try to fathom them and explore the greatest of the Christian mysteries. In a Polish context it seems to make sense to me that one may reverently consider the Divine Mercy image anew as a modern re-actualization of the spiritual life represented by the apparition and that message of sister Faustina. On the one hand, it seems very old-fashioned and it’s a devotion that we know as a centrality to the Church’s moral and spiritual life. On the other hand, it’s a typically modern event and message, so why should we not think it could be depicted in a new way or new ways today? If we look at the history of art, the most profound mysteries, like the Annunciation, or the Nativity, or the Crucifixion are depicted cyclicly down through the ages in new ways. The re-depiction of the Divine Mercy could be thought of as a respectable attempt at epochal transference and continuation, a re-creation or re-articulation of that perennial mystery of the importance of that message for our own epoch in a slightly different key. It seems appropriate at this delicate moment in Polish cultural history where the question of catholicism hovers above and is thought of as ambiguous charms by many, to explore anew what Divine Mercy means in the context not only of the 20th century and its enormous suffering but also the 21 st century where we have to make new discernments about how to use our new-found human freedoms and opportunities. The message of the Divine Mercy is the perennial one but we have to explore it in our contemporary context.