On November 9 hundreds of people visited the Dominican Monastery in Cracow for the official opening of the exhibition of paintings of the Merciful Jesus painted according to the visions of Sister Faustina. The exhibition will last until January 6. 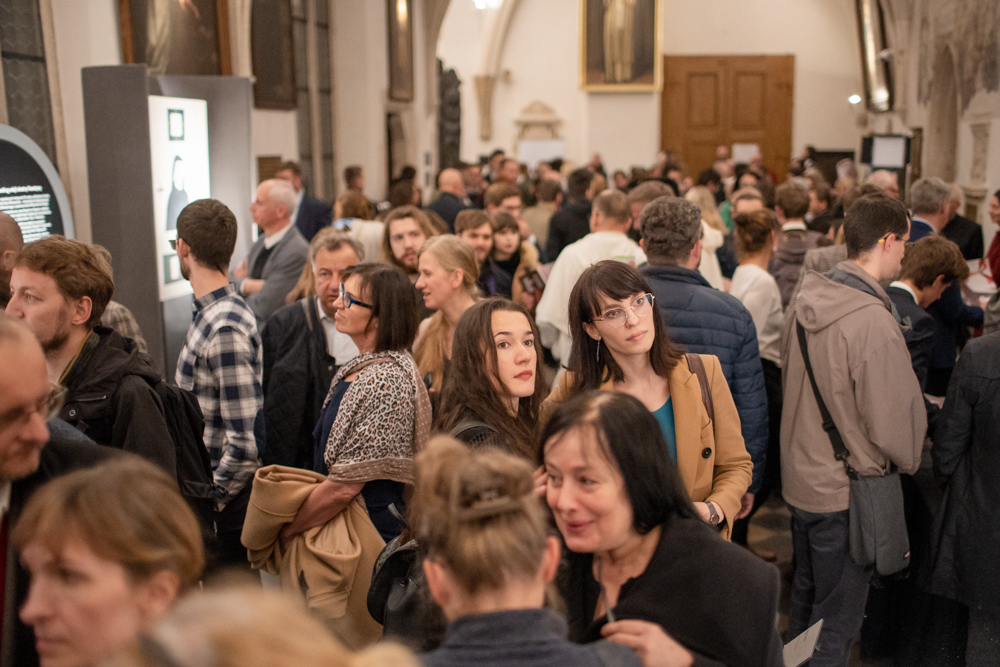 On the evening of November 9, in the Cloisters of the Dominican Monastery in Cracow, a solemn yet spectacular ceremony was held to unveil ten paintings of the Merciful Jesus created by Polish painters based on the visions contained in the Diary of St. Faustyna Kowalska. The curator of the project, Dariusz Karłowicz, began the opening with words of appreciation for the painters who undertook this demanding task, or, as Jarosław Modzelewski said, the most difficult task in his painting life. Reflecting on the essence of this struggle, Dariusz Karłowicz emphasized the burden on contemporary artists due to the established tradition of rendering this painting, deepening secularization, widespread aversion to the Church, and the lack of sacred Catholic art in Poland. As Dariusz Karłowicz pointed out, sacred art, at its core, measures itself against an ontological drama: it attempts an approachable, figurative representation of what cannot be seen. Thus, it is considered successful when it does not fail completely in this impossible task. At the same time, he emphasized that sacred art only makes sense when it serves worship. Encouragingly, thanks to the confidence of the bishops and pastors of the Warsaw-Praga Diocese, most of the paintings shown at the exhibition will soon be in places of worship. Seven of the ten paintings were purchased by the pastors of this diocese.

As Dariusz Karłowicz continued, “Sister Faustyna Kowalska wept when looking at Eugeniusz Kazimirowski’s painting, but not because of the artistry of the work. She cried over all those who tried to “look behind the veil” of the mystery of God’s transcendence, Leonardo, Raphael, Piero della Francesco, the Summa of St. Thomas, The Confessions of St. Augustine and The Thoughts of Pascal. Today, painters have agreed to take the risk of looking behind that veil again.”

Sacred art is a form of approaching what cannot be seen

As previously announced, the paintings created as part of the “Let’s Paint Catholicism Again” project are to be just the first stage of a much larger undertaking, which has been planned for 21 years. The assumptions of the first year of the initiative have been realized, and the next 20 years are planned to be devoted to the next great themes of Catholic painting, the next twenty mysteries of the Holy Rosary. For taking part in this installment of the project, special thanks were given to Jarosław Modzelewski, who not only agreed to paint a picture of the Merciful Jesus, but also invited six outstanding painters to participate in the initiative. With thunderous applause from the many guests in attendance, all the artists of the project were once again rewarded: Bogna Podbielska, Beata Stankiewicz, Ignacy and Wincenty Czwartos, Jacek Dłużewski, Wojciech Głogowski, Father Jacek Hajnos OP, Krzysztof Klimek and Artur Wąsowski. Special thanks were also extended to the project’s patrons, without whom its implementation would not have been possible, namely Danuta and Krzysztof Domarecki, Jolanta Domańska-Gruszka and Mirosław Gruszka, Wojciech Piasecki, and Danuta and Tomasz Zdziebkowski. Yesterday in Krakow was also the premiere of a book by Dr. Izabela Rutkowska, a prominent researcher of Sister Faustina’s Diary.

Taking the floor, Jarosław Modzelewski thanked all the painters for fulfilling the task entrusted to them, while at the same time cautioning not to look at these paintings as competition entries for the most convincing image of Christ, as painting them was a great challenge, and this imposes an obligation on painters to adopt a humble attitude towards the viewers of these works.

Bishop Jacek Grzybowski then took the floor, reminding us that Christianity and art meet on many levels, and are united by their reverence for truth, goodness, beauty and freedom, united by their admiration of every form of God’s epiphany. This meeting of Christianity and art is brought closer by a premonition of the order that lies beyond the visible. The bishop pointed out that. Bishop Grzybowski continued: “Great efforts should therefore be made to ensure that this fatal divorce of Christianity and culture never happens. The project that has been initiated is the idea of a renaissance of Catholic sacred painting. Contrary to all those who thought that sacred art is a phenomenon that belongs only to the past, outstanding artists have created works of great depth, reflection and theology. Outstanding figures of the 20th century, St. Sr. Faustina Kowalska, St. John Paul II conveyed the most important religious idea for the 21st century – the power of Divine Mercy.”

Culture without reference to transcendence becomes empty, and Christianity without culture becomes mute, unable to understand either itself or transmit this understanding to others

At the end, the subprior of the Dominican Monastery spoke, recalling the words of one of the great theologians of the liturgy, Alexander Schmemann: “The greatest drama of man is a non-liturgical life in a non-eucharistic world,” by which he wanted to draw attention to the need to re-learn how to celebrate the gift of creation, time, matter and things. We are incapable of adoring the Creator with them, we are disconnected from the ability to give thanks. This art, therefore, should transform us toward a renewed liturgical life in the Eucharistic world. We should learn anew to celebrate all that we are, our society, our culture, and to give thanks to Him whom we are worthy to adore.

The final element preceding the official unveiling of the paintings was also the most important one – the prayer to Divine Mercy.